Rasty Feline – Come here – I want to see you.

Rasty Feline – Come here – I want to see you.

Back in 1876 I would imagine that Mr. Bell had no idea how his invention might take unify the world.

I appreciate that telephones and long distance dialing are nothing new, and yet I can still find ways to be amazed.

Since my job is global, I’m often up early in the morning to take conference calls. No matter what time of the dark night I rise, The Feline is always certain that it’s time to be fed.

I usually ignore her until the clock spins around to the right feeding time, but this does not sit well with The Feline. Which means she rather vocally lets me (and The Good Man. And the neighbors) know just what’s on her mind.

I usually keep my phone on mute and I close the door to my home office to keep her out, but that does not deter the persistent one. She’ll get her snout into the gap under the door and let the vocalizations rip.

Through the magic of telephonic technology, my crabby Feline has been heard around the world. London, Singapore, Sydney, Mumbai, São Paulo, Kuala Lumpur, Tokyo, Argentina, Columbia, Sweden, France, Ireland, and more have all heard her pleas.

Two weeks ago, I was on a call with at least six vice presidents and executive vice presidents of my company. I fed the Feline early to pipe her down. I was on mute. I said very little. I made sure she was far away from this call.

Little did I know…

The second I went off mute to give my input to the executive team, The Feline had something to say.

Yes, executives of a multinational company had to hear my damn cat hollering.

Today was a first for The Feline. This morning she was heard in Kenya. Yup, all the way to Nairobi. May all those nice people in central Africa know: “I will not be ignored!!”

By the way…if it’s seven in the morning and you are stumbling around trying to dial Kenya with a country code of 254 and you forget to dial the 011 first…well, you talk to a really nice lady in Waco, Texas (area code 254) who wants to know why in the heck you are calling her. 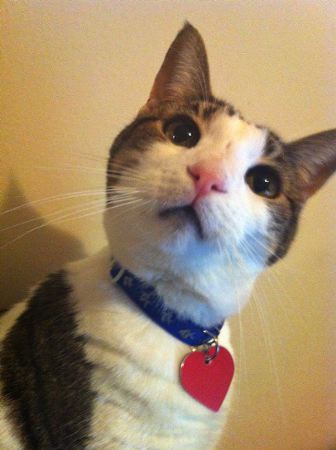 Photo by Karen Fayeth and taken with the Camera+ app on an iPhone4. Photo subject to the Creative Commons license found in the far right column of this page.