Sometimes I wonder how I manage to still be living in California.

Sometimes I wonder how I could ever live anywhere else.

Happy sunny New Years Eve from the coast at Half Moon Bay.

Image Copyright 2011, Karen Fayeth, and subject to the Creative Commons license found in the far right column of this page. Taken with an iPhone4s and the Camera+ app.

I’m rather blown away at the recent rapid advances in the quality of mobile phone photography.

The art from has gone from a simple lo-res snap and upload to Facebook, to a genuine, respectable medium.

Today I’m going to gush like a lovesick schoolkid over a product from the Photojojo store that just happened to find its way under my Christmas tree.

Called a Macro Cell Lens Band on the store listing, it retails for $15 and is simply a small macro lens that fits on my iPhone by way of a sturdy rubber band.

Here it sits my iPhone (photo taken with The Good Man’s iPhone): 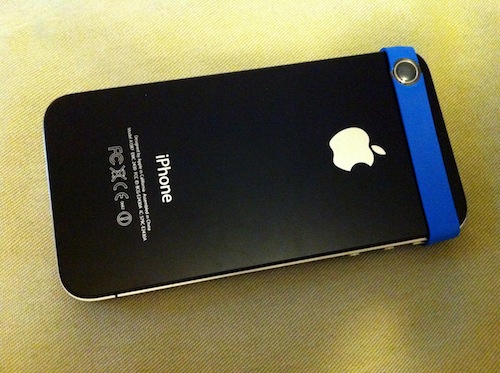 Easy to install, easy to use.

Since the internet is loaded with budding photographer’s photos of cats, I decided to turn my new lens on my other unsuspecting pet, my male Betta fish: 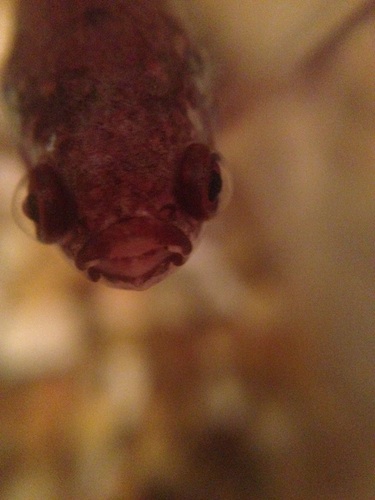 Photographing a fish is rather challenging, in that he is constantly on the move. The camera on the iPhone4s has a much quicker shutter and handles light so much better that previous versions, so I was willing to try.

One thing about this little macro lens, you gotta get close up on your subject. The little card that comes with the product suggests about 1 ¼ inches. That’s pretty close. My Betta is terrified of my big DSLR but seemed curious about the iPhone, so that helped my cause.

I’ve noticed when shooting my very expensive macro lens on my DSLR, I struggle with focus. The macro lens will only make one part of the photo crystal clear and the rest is not.

This little rubber band lens is the same. I love that the little fishy’s eyes are so clear and detailed. I just wish the rest of his face was too.

It’s such a handsome face.

Due to the low lighting in the area where the fish tank is located, these photos are a bit noisy, but not terribly so. I think with more light that would be less of an issue.

The Good Man says this one looks like Admiral Ackbar

Overall I’m deeply impressed with what this inexpensive little lens and an iPhone can produce. These photos were taken with the Camera+ app, by the way.

Just a little bit of magic on a blue rubber band. Brilliant!

Look at this photo of a snowflake on a pine needle. It was posted on Facebook by Hipstamatic Rocky Mountain and he used the macro lens on the Olloclip and the Hipstamatic app.

And in my humble opinion, a huge leap forward for the medium of iPhoneongraphy.

This was not a paid review for any of the products mentioned in this post. This is simply my joy and enthusiasm for new techniques and tools for the art of iPhoneography.

Other than the snowflake photo, all photos in this post are Copyright 2011 by Karen Fayeth, and subject to the Creative Commons license found in the far right column of this page.

For the past three days, it has been me, a U-Haul box (size Medium) filled to bursting with papers, and a shredder.

Then the machine overheats and stops shredding. Then I go back into our under-house storage and pull out another box, bag or whatever and go through it until the shredder cools off.

Then I start shredding again.

Today, as I got down to the bottom third of the box of papers, I was sucked into a time warp. I was pulling out bills and correspondence dating back to 1999.

That’s 12 years ago. Twelve-year-old documents. Twelve years is both a very long time and yet a mere blip in the world.

It has been quite an archeological journey through the strata of one medium size U-Haul box.

Here’s a few things I’ve learned along the way:


1. For the most part, the stuff that I kept was the kind of stuff that shouldn’t have gone into the trash. For example: pay stubs with my social security number, account numbers and other identifying information listed. Papers with credit card numbers. Things like that.

Where I fell down was in not having a shredder. When I moved from the South Bay to this place, I burned out my old shredder and didn’t replace it. So I just kept all these papers in a box.

About 2007 or so The Good Man and I bought a shredder and so I’m doing a better job of keeping ahead of this stuff.


2. I’m not actually a hoarder. Last evening I was a bit worried. I journeyed deep into the bowels of Google to read up on it. A true hoarder will have stuff filling every corner, including their car.

I abhor having a car filled with crap. Also, I think it’s a travesty to have a garage and not be able to park in it.

So my hoarding side and my tidy side conflict. This tenuous balance is what keeps me on the “not so bad but could use some work” side of the hoarding line.


3. It feels really good to shred every remnant from a job I held for just a year and that treated me very shabbily.


4. Boxes of crap kept up off the ground don’t mold. Boxes sitting on the ground become a scary experiment in the rapid proliferation of mold.

This doesn’t happen in New Mexico.


5. I don’t bounce checks nearly as often as I used to.

I’m sure that’s partly because I don’t actually write checks anymore. But I also don’t overdraw my account like I used to. I shredded TONS of notes from the bank notifying me that I was overdrawn.

I haven’t seen one of those in a long time. Like years.

I think I used to play it pretty fast and loose with the float time on checks. Not so much these days.


6. I still keep a copy of all the important payments I make (like a copy of the check sent to the Superior Court to pay a red light camera ticket) but I don’t keep them in paper form anymore.

Ain’t no one gonna complain about a cluttered hard drive but me.


7. Getting out from under a pile of twelve year old crap feels really, really good.

So good I uncorked a nice bottle of red and am relaxing tonight feeling pretty happy about my progress.

So the shredding is done and the separating the wheat from the chaff, or the donate from the trash, continues tomorrow.

Image from The Lake Mary Blog.

While we haven’t quite yet passed to the end of 2011, I’m already in progress on what will surely be the biggest change to impact my new year.

You see, the Good Man and I are moving house.

It’s not a big move, just a few miles away. But we are moving to a much larger place with two, count them TWO full bathrooms.

I experience waves of joy at that thought.

As the landlord is completely renovating the place (we get to move in with all new paint and floors and appliances, yay!) we won’t actually move until later in January.

Here’s the thing. I have lived in our current spot for almost eight years. The Good Man moved in almost five years back. But for me, eight long years. That’s a lot of time to accumulate crap.

A lot of crap.

Over the years, I may have been accused by friends and family of having difficulty with throwing things away.

I’m not a hoarder. Much.

I mean my place isn’t floor to ceiling with newspapers I can bear to part with, but the extra large storage space under my current place IS full of all manner of stuff that should have been thrown away or donated long ago.

The Good Man is fairly organized and keeps his stuff pretty tidy. He goes through everything about once a year and culls out, cleans out and donates.

So laying ahead of me, I have a fabulous future with a shiny new home. It has a fireplace! And a deck. And an actual living room.

Surrounding me, I have boxes and bags and barrels of crap to sort through.

I pledged this week that I’m off work to clean out everything under the current house. So instead of enjoying my bright future, I am lost in my past.

Today I went through a huge box of papers, bills and receipts. This is my personal weak spot. For some reason I think I need to keep every receipt I ever get. The Good Man has me on a rehab plan so I don’t keep doing this.

I traded in that Jeep on a new one in 2001. So I kept an almost seventeen year old document on a Jeep I sold ten years ago from from a state where I no longer live.

I remember talking to my mom in the year after my dad had passed. She was going through everything they owned with plans to eventually sell their house and move somewhere more manageable.

In the stuff, she found a box of papers that my dad had kept. In this box were bills and receipts that dated back to the first year of their marriage. They were married for forty-five years.

Mom fired up a burn barrel and alternately cried and cursed while disposing of the stack of paper that had (unknown to her) been a part of her life for her entire marriage.

Today, as I shredded, I thought about that. I though about how mad The Good Man would be if I died and left him with all of this crap to sort through.

I have to strive to be better, to get rid of stuff more often, to keep my piles of crap under control.

My future is bright. But I gotta sort through my past first.

Image from The Magic Forest.

This is an early entry for this week’s Theme Thursday fun. This week’s theme = future.

Have yourself a merry little Christmas Eve.