Back in June I posted about the ghosty caught on film at the courthouse in Santa Fe.

I have to admit, watching the video I was pretty bought in. It was *weird*.

So sadly, last night, while surfing about I found this article on Yahoo.

Way to de-ghost my holiday!

Turns out it was a ladybug. Probably.

Halloween is nigh, only a couple days away. I do love Halloween, it’s all sorts of fun. Halloween has always been the San Francisco version of Mardi Gras. Not this year, I guess. SF has decided the fun in the Castro is too dangerous and have clamped down. The Mayor cancelled Halloween! Oh well, SF will find a way to party, I’m certain.

Meanwhile, The Cute Boy™ is something of a Halloween grinch. We’ve made plans to be out on the 31st (shades of my folks…their wedding anniversary is the 31st and every year I had to *wait* until they came back from anniversary dinner to go trick-or-treating. It was agony.) But that’s ok, I’ll get a nice dinner out of the night so I can’t complain. Plus I’d eat all that candy I would have bought…so maybe this is saving my waistline.

But we did have Halloween fun this weekend. A friend threw a pumpkin carving party with great eats.

Here’s our creation, I’m pretty proud of it: 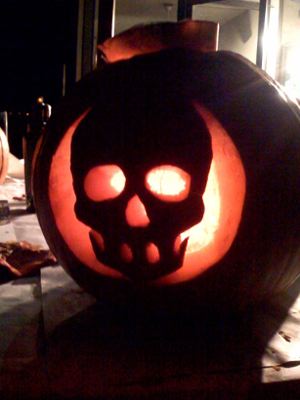 Gotta love Bill Richardson. He’s in there swinging away. I’m not sure he can hold his own in the elections versus Clinton and Obama, but he’s not going down without a fight and without distinguishing himself, at least a little, from the rest.

While Governor, Richardson made national headlines by vowing to determine that the grave of Billy the Kid in Fort Sumner, NM really holds the remains of the outlaw, and not some other location in Texas.

It was amusing, to say the least, to see my state getting AP coverage. Richardson’s passion about the story was admirable. He didn’t go in half-assed and it was a calculated move that gained him some attention.

And now this from today’s Albuquerque Tribune. Richardson saying that if elected president, he’d dig into the Roswell UFO files. It was a road that Steve Schiff went down for a bit before his death, asking the General Accounting Office (GAO) to investigate the Roswell crash.

This move by Richardson that will gain him the quirky vote, for sure, and makes him seem a little more human than the other perfect haired politicians, but will it be enough to coast him into the White House?

Either way, I’m enjoying the campaign he’s putting on. It’s nothing if not entertaining.

Tales from the rails

So today was another commuter day. Not because I needed more penance for my sin of speeding, I’m over that. No, today was a commuter day because it’s a good idea, it saves money (commuter subsidy, yay!), and walking to the train station and to all my meetings in other buildings is a nice way to force my expanding backside to get up and walk.

It kind of blows to commute on a Fall into Winter morning, because the mornings are staying dark longer. It was not light yet when I rose, because I had an early meeting which meant taking the early train. Ugh.

The Cute Boy™ grumbled, mostly, when I went to kiss his sleeping self goodbye. “I love you” was greeted with a grunt that meant, roughly, “love you back”.

The upshot of a cold Fall morning is that I didn’t get as sweaty as I usually do on my walks. I’m a sweater from way back. I know, so not dainty.

So it was a pretty uneventful morning. Got the station on time. Train was on time. Found a seat right away. Read my book. Felt ok with life.

Got off the train and clambered onto the shuttle that goes from the station to my place of employment. The shuttle is usually where the real weirdos are. It’s like the train is fine, the weird asses are folded in with enough normal as to be hardly noticeable, but at that train station, we all fall through a sieve and the real gems of oddity funnel onto the shuttle bus with my employers name pasted on the side (yes, I know, what does that say about *me*?).

I found a seat, settled in for the shaky ride that takes about ten minutes. I was reading again when my weirdo spidey sense perked up. I lifted my head and looked around and found the lou-lou of the day.

Most of us carry backpacks in the Sili Valley. We’re all toting all manner of electronic gadgetry, so it’s easiest to haul ’em on your back, like an overpaid, overworked pack mule. On the shuttle, people either hold their pack on their lap, put it on the seat beside them, or at their feet.

Not this guy. He had his backpack standing straight up in his lap, arms wrapped tightly around it, hugging it to his chest. For dear life. Like it was a long lost brother. Like the love of his life. It was nestled under his chin and he never wavered from this loving embrace until we arrived at the destination, then he tossed it on his back and walked into the building.

Did he have some super secret product in there that’s on the forefront of technology, that will blow everyone’s minds, and he’s protecting it with his entire body? Is he devoid of passion and loving embraces in his life and his nylon pack is the best substitute? Is he an emotional basket case about coming to this godfersaken place every morning and the only way he can make it is to cling to something like a motherless rhesus monkey trying to suck warmth and love from it’s cloth panels and padded straps?

Who knows. It was just…weird.

You’d think after eight years at this place I’d have gotten over all the culturally encouraged weirdity.

Which makes me wonder…have I ever been the weird one on the bus? The one that’s talked about in the latte line? Hmm…..