Got to reading an article in the Albquerque Tribune today titled, “Even presidential candidates have their dream jobs”.

It’s an insightful bit about the current roster of candidates and their answers to some AP questions. Sort of a “get to know you better”.

But that’s not the problem.

The problem is that…as is well documented, our Governor, one Mr. Bill Richardson wanted to be a baseball player as a youth. This we know. And to illustrate that, the paper includes a file photo from 2003 of the Guv tossing out a first pitch at an Isotopes game. And when you click the photo it gets large. Real large. Large enough to see more detail than you need….

I have seen the furry belly of our Governor. I might never be the same……

It also bugs me that Hillary couldn’t give a succinct answer and that Colorado Rep. Tom Tancredo smarmed it up and said President. But that’s another post for another day…..

My Karma is Ok Today

I work for a fairly popular global company. It’s pretty well known and has managed to impact the way we look at a lot of things. It’s wild to me how people associate with the branding of this company.

In fact, my big behemoth of a company is something of a rock star.

In my many years working here, I’ve seen a LOT of people come by, whole families, mom, dad, kids and the dog, to have their picture taken in front of our corporate headquarters. More times than I can count I’ve had people ask me of there is a tour they can take. (Of what, I think…people working at their desks?).

Today I was walking back from a meeting, very thoughtful in my head, composing an email I need to send to an executive that needs to be a bit terse, but comes off as not terse. A fine line, I assure you.

I had occasion to walk by the main sign in front of our building and saw three Japanese tourists there taking photos of each other standing next to the sign.

I remembered how when I, hayseed that I am, was in New York and native New Yorkers would stop and ask if I wanted them to take the picture of me standing next to whatever thing I was taking a photo of. I thought it was SO nice and told many of them I no longer believed the bad rap that New Yorkers get for being mean. It was a love fest. And I’ve told that story to anyone who will listen.

With that in mind, I walked up to the group that was blocking the sidewalk. They turned to look at me, realized I was an employee and got a moment of “she works for the rock star” look in their eyes.

I said, “do you want me to take a picture of all of you?” while pointing and gesturing. The woman looked embarrassed and confused and looked at the man next to her. They exchanged words in their language then looked at the third man. I said again, “I’ll take a picture of all of you” and smiled as though that would somehow translate my American English. Then I began feeling bad because they didn’t understand me and I’d somehow accosted them on their vacation. I turned to walk away when the third man piped up and said “ok!” and without reservation, handed me his camera.

All grins and giggles the three piled up by the sign. I put down my books and sweater and made sure I had them in frame. I didn’t want to mess up this moment. They smiled, I smiled, the shutter went click. I looked at the LCD. It’s a nice photo of three friends, so happy to be by the sign of a company they admire, having their photo taken by an employee of the company.

I hope they have a good story to tell when they get home.

Does my Heart Good

It does my heart good to know that wild horses still exist in New Mexico. It says that despite all the encroachment of civilization, wild horses still run free, and that speaks to both my heart and deep places in my soul. True, the numbers are greatly diminished and the day will come when they aren’t there any more, but as of today, they still run wild.

Read in the ABQjournal today about an adoption put on by the Forest Services from Carson National Forest. Sadly I live in an overcrowded-overpopulated-overgrowth area where a postage stamp of land costs millions. If I did have the land, I’d gladly pay the $125 per head to let a few continue to run wild on my dime. I wouldn’t even try to saddle break them or make a mustang conform to my way of thinking. I’d just let ’em blast out the back of the trailer and then take great joy in watching them run, heads tossed in the wind, mane all covered in brambles, but free as the day the pony was born.

I’d like to give a tip of the hat to the Wild Horse Observers Association of New Mexico who are working to protect these wild animals and keep them running free in New Mexico. They also look to limit the roundups and sales that greatly cut down the herds.

I know my view might be a bit controversial, but that’s where I stand. Over Christmastime I had occasion to be in Laughlin, Nevada and saw a few of the wild burros that run around that area. It made me smile. I considered it my Christmas present from the universe.

I guess being a child of the West, it makes me happy on a deep cellular level to know that wild things still run free, and no matter how much I have to conform to my boss, my job, my society’s expectations, I can still imagine the rapid beating heart of a wild pony as he races across the high desert, ears twitching, nose snorting and tail flying.

Today as I sit in my gray cubicled world, that sounds pretty enticing. 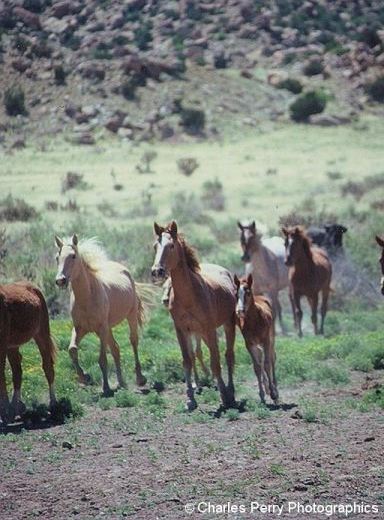 So what do you think?

The four designs for the New Mexico quarter were:

I guess Governor Richardson approved one today (I think number one is the choice) and that will be our quarter.

Yes, we have no post-anas….

It’s a bad day when work gets in the way of your real life. That being said, watch this space because warm posty goodness will be coming your way soon enough.

Meanwhile, back to the Gods of Corporate who own my ass today and I’m not sure how I feel about that.

Wait, yes I am sure how I feel about that. It sucks. A lot.