Do I Smell Toast?

On Friday morning I had what could best be referred to as one of them déjà vu kinda deals. Wikipedia says that’s “the feeling that one has lived through the present situation before.” Close enough, let’s go with it.

I ended the stressful workweek with a fairly intense morning meeting. It was a good meeting, but it was intense. When it was done, mentally beat up and a little worse for the wear, I left the building to walk to my car to move on to the next part of the workday.

Whether the heat, the quality of light, the alignment of clouds in the sky, a smell, or something entirely more woo-woo, as I walked to my car I had this overwhelming desire to lay down on the warm concrete sidewalk, just like I used to do when I was a kid. Follow with me here.

Growing up, I loved to go swimming at a public pool that was less than a mile from the house. Very walkable across a lovely green park and over to the pool. Once there I took to the water like it was my second home. Splashing around, spinning into summersaults, trying to see how long I could stay under, doing handstands, all of it. I’d stay in there for hours then when it was time to take a break, I’d breach the surface like a sea lion and flop onto the sun warmed concrete. Teeth chattering, I’d lay with my body straight out with arms tucked underneath.

The hot concrete warmed up my skin while the New Mexico sun baked the other side of me toasty brown.

There was a certain smell, the hot wet concrete and chlorine mixing with the cut grass smell from the park just over the fence. So much better, even, than laying in a pile of towels fresh out of the dryer, and that is pretty damn good.

This past Friday, I didn’t just think about this memory, I actively wanted to live it again by laying down and hugging the concrete. I had to use the grown-up voice inside of me to say, “don’t you do it or so help me…”

That feeling didn’t go away for a long while, long past when I’d climbed into my car and drove off, landing back at the office and back at work. The feeling still resonated with me and throughout the day, I had such a yearning, an overwhelming need to feel that feeling again.

Later, after work, over a glass of something lovely and chilled and delicious, I pondered why exactly I had such a strong memory and overwhelming desire to lay on warm pavement.

Was it nostalgia for the simple summers of childhood? Easy days not spent inside negotiating with recalcitrant suppliers. Days where could idle by the pool.

Was it the sense of warming comfort I’d get from hugging the concrete? A deep satisfying down to the bones warmth, like a comforting hug from the sun.

Was it simply a synaptic misfire in an already overwrought brain? Do I smell toast? Hell, I really don’t know.

Even as I write this a few days later, I can still feel that yearning somewhere inside. I don’t really need to do anything to remedy this, like go seek out a swimming pool and hot concrete. I just know that this out of nowhere memory stays really strong with me. A feeling of having lived through it and a desire to feel that again.

To compensate, I spent much of the past weekend out on the back deck soaking up a little California summer sun, but not so much that my fair skin burned. I sat out there watching the world go by and pondered my own life enough that I’m now tired of thinking about it.

I do still wonder, though, where the hell that memory came from. And why.

Then again, maybe thinking about it too much takes away the magic off the memory. A good reminder to myself to just, you know, let it be. 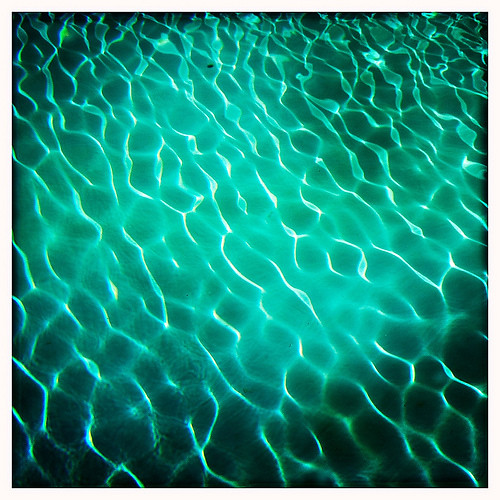 And oldie but a goodie from my Flickr archives, the swimming pool at Filoli Gardens

Content and media are subject to the Creative Commons license in the right column of this page.