Shock and Denial – Will says, “You are missing planet Pluto. Please make a model of it.” Then follows up with an illustration in case the scientists don’t remember what it looks like.

The things that stick with you

Yesterday, in celebration of my mom-in-law’s fabulous birthday, the three of us (The mom-in-law, The Good Man and me), loaded up for a trip to a museum.

It’s become our tradition on birthdays. We have a day of culture in celebration. Memorable days are the best presents ever.

Yesterday’s destination was The Contemporary Jewish Museum in San Francisco.

But I love museums, so I was totally in.

I was fully unprepared for what awaited me. There were just three main exhibits, as the museum itself isn’t that large.

The first exhibition we visited was called: “Our Struggle”: Responding to Mein Kampf

I’d read online how French painter and photographer, Linda Ellia, took on a project to have artists and non-artists alike transform the pages of Hitler’s nasty tome.

“The book’s weight in her hands embodied the heaviness of the Holocaust; she felt compelled to respond. After personally altering a number of the pages to express her anger, she invited hundreds of people from all over the world to paint, draw, sculpt, and collage directly on the pages of the book.”

I could not have begun to imagine how tragic, and beautiful, and life affirming the exhibit would be.

There were over 600 altered pages on display, each one with a unique voice, a unique pain, a unique promise.

The works were sometimes simple and elegant, like the page where every word was carefully excised, leaving only a page of small rectangles. Or a page where every letter was made into a small figure of a person.

In some cases, the works were very extravagant, a train, in exquisite detail, done in watercolors, completely covering the page. Or an intricate felted and painted heart that was then sewed and stapled to the page.

Each page transformed the words of hate into a work of art. Truly, deeply, reclaiming those pages.

I don’t know if my description or the websites description even does the exhibit justice. It was one of the most profound things I have ever witnessed.

And this one will stick with me for a while.

(image of The Contemporary Jewish Museum, from their website) 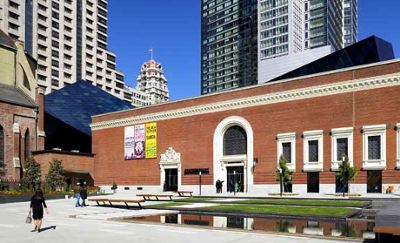 Stepping into the wayback machine, I recall a trip I took with my parents when I was twenty-one.

It was their birthday present to me, a trip to Las Vegas (all of us kids got such a trip when we became of legal age.)

While there, we paid a visit to my aunt and uncle who live in a small town outside of Las Vegas.

My grandmother was staying with the aunt and uncle, so it was a smallish family reunion.

As we all bedded down for the night, being the youngest, I took up my place on the pull out bed in the living room. This gave me a ringside seat for the show that lay ahead.

In less than 20 minutes, I began to hear the distinct sound of my grandmother snoring. Oh, she was a world-class snorer.

Soon enough, I could also hear the recognizable sound of my dad sawing up some logs.

Mom joined him quickly, singing harmony in this snore chorus.

From the other direction of the house came sound new to me, but easy to identify. My uncle, also snoring. More quietly but surely there, my model beautiful aunt also found her nasal instrument.

Great. Five adults, all sawing the logs. I didn’t get much sleep that night.

I vowed to myself that I wouldn’t become a snorer, no matter how much age and genetic heritage may dictate it would be so.

Plus, I am a very light sleeper, I reasoned, so I’d wake myself up if I started down the road of my destiny.

Time passed, as it will, and wouldn’t you know it, my nose and soft palette have found their tuning. I’ve managed to become a snorer.

Not massively so, as attested to by The Good Man, but yes, I do snore.

And yes, I do usually manage to wake myself up when I do.

Like, oh, about half hour ago when for some reason a sound much akin to an angry hippo issued from my nostrils.

Ladies also don’t sweat, so I am unable to account for the pool of moisture around my neck upon waking up this morning.

A couple years ago, The Good Man and I joined another couple for dinner and drinks at one of the yacht clubs in San Francisco. The Good Man’s best friend is a member.

After a fine meal, the four of us retired to the bar where, with drinks in hand, we engaged in a rousing game of liar’s dice.

Well, just as things get rolling, as it were, an Admiral of the club, a huffing old Caucasian man with a bulbous nose and wearing a rumpled navy blue jacket bustled over to us. He leaned over the bar and blurted, “Ladies do NOT shake dice in bars!”

Remember when you were a kid in the front seat when your mom was driving? When she would hit the brakes, that strong mom arm would come out to protectively keep you from flying through the windshield?

The Good Man and his best friend did something akin to that, keeping both of their lovely wives from rocketing up off of their bar stools and becoming real unladylike in a hurry.

So let’s see…let’s recount my offenses. Shaking dice in a bar. Sweating. Snoring.

A lady can indeed shake dice in a bar! And also, I suppose, snore. Ladies can also drink whiskey, shout at sporting matches, drive too fast, belch, curse and gamble.

There. That oughta cover me.

At least for this week, anyway.