Ohmmmmmmahgod I Need To Smack A Coworker

Ohmmmmmmahgod I Need To Smack A Coworker

So far this week I’ve been locked up in a conference room with a bunch of coworkers (from another organization) as we “frame up the situation and map out resolution.”

It seems my little ol’ program is getting some attention, and in the long run it’s a good thing.

In the short run I have a bunch of people who understand squaddily poo about what I do now getting into my shorts and being shouty.

My little program has grown from a sideline that nobody cared about, and actively avoided, to a pretty significant strategic team with big spend. Meaning, I fixed a really BIG problem when no one else gave a rip, and now that it’s under control and earning some positive attention, everyone wants to lift it from me.

All the people I’ve spent two years begging to help me as I fought and threw rocks and banged my head on a brick wall are now harassing me about why I didn’t ask them for help sooner.

“I did!” I shout back, “About three times and your team shot me down every time! So I made my own rules.”

Yesterday afternoon we mixed it up pretty good. You may or may not have noticed this about me from the blog but…I’m a bit of a scrapper. You bring me the fight, I’m not going to back up.

My boss, on the other hand, is a self-described “Non-confrontational Swede”.

He was sitting next to me during the meeting and every now and again would lay a hand on my elbow and murmur “Calm down. It’s ok.”

Kind of hard to fight for my program when my boss would prefer I play nice.

So as I went into the meeting this morning, as a concession to my boss, I brought this with me: 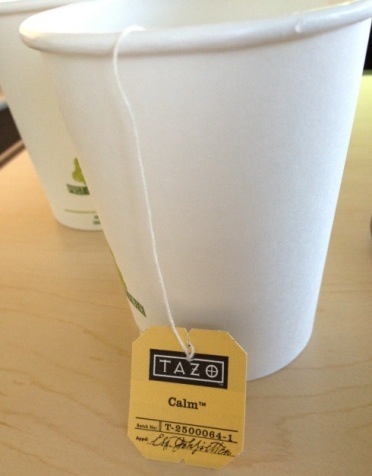 I had little expectations that the warm chamomile would actually work, but the tag on the side of my cup was a good reminder. Stay calm. Go to my happy place. Mudra hands. Higher thinking. Be one with the process. Breathe.

What’s funny is that about an hour into today’s meeting as I stepped back from the fighting and just let it unfold, my Boss finally lost his sh*t. He took it as long as he could and then he let loose on those yahoolios.

When you have someone like a “Non-confrontational Swede” who is usually silent, when he shouts, it’s really something to behold.

I wanted to high five him but held back.

Even as my aggressive American ways sometimes cause my boss consternation, I think he also relies on me to be that person willing to stand up and fight.

In a weird way, his quiet ways and my not-so-quiet ways actually compliment each other pretty well.