The problem isn’t entirely my fault, but it’s my team, and I manage them, so I take the fall because that’s what a manager should do.

The time zones are right, mostly, for talking to my folks already working through the end of what is their Thursday, pesky time zones being what they are. It’s really right timing for talking to my boss. Four thirty means noon-thirty in London and the meaty part of his day.

He asks me why the hell I’m up so early. Well, for one thing, I can’t sleep. For two things, there are emails scorching the inside of my email inbox. Someone’s gotta do something about it, and that’s someone’s gotta be me.

So we’re talking. My voice is still creaky from lack of sleep as I make my case. “I’m in over my head here,” I tell him, and he agrees to help.

I’m keyed up on adrenaline and buzzing like a pot of coffee and two five hour energy drinks dancing a polka across a vat of 1970’s diet pills.

The boss and I are puzzling through the problems. We’re working on solutions. I’m trying to answer as best I can and agree to find out answers to questions I don’t know.

So the boss is talking, going on a long riff as he’s wont to do. It’s good stuff and I’m listening hard. While I listen, I lean my chair back on two legs, perched there for a moment.

I say “two legs” but perhaps I should say “two wheels” because that’s really the case. I’m nestled into my worn but comfy home office chair. I do this all the time, go up on two wheels, while I’m thinking or listening or just because.

I’m listening. I’m “um hmming” and I’m very into the conversation when I guess the gods that rule gravity decide that it’s time they had a say in this situation.

With nary a wobble or early warning, I go from being semi-upright, let’s say a nice 10 degree angle, to staring at the ceiling, knees in the air, I’m-an-astronaut-strapped-to-a-solid-rocket-booster-and-ready-to-light-this-candle position.

This descent of Karenkind does not occur without some noise. And by noise I mean a bone-jarring rattle that travels in waves through my seventy year old domicile. I can hear the plumbing pipes rattling below the floor.

The boys who follow earthquakes over in their center in Palo Alto might have noticed a barely imperceptible blip on the screen while taking another sip of stale government coffee. Meanwhile, seismic waves are going off in my home.

The curious cat, a moment ago fast asleep, comes galloping down the hall to find out what’s the deal. The Good Man turns on the bedside light. I see the yellow glow at the other end of the house.

Over there in London, either my boss hasn’t heard or doesn’t care. He keeps talking. I lay there, knees up, and listen. And reply. I continue the conversation, because the last thing I want to hear right now is “what was that?” because I have no good answer. “I just fell over in my chair” doesn’t exactly inspire confidence in my capacity as either employee or human.

I half expect The Good Man to come check in on me, and am glad he doesn’t. I assume he hears me still talking and believes me to be all right.

Slowly, making the least amount of noise possible, over a period of several minutes, I slide out of the chair and slither into an Indian-style sitting position on the floor.

I finish my call. I hang up. I put my chair back upright and I pat its fake leather back as if to say, “we’re all right, big fella.”

I walk down the hall to go back to bed. The Good Man is snoozing with the light on. I place my iPhone on my bedside table, and as I do, I knock a stack of hardcover library books onto the floor. They make a sizable crash.

Apparently gravity and me are gonna tussle today. Being as how he has the law on his side, I think gravity is going to win.

I plan to give it a good fight. 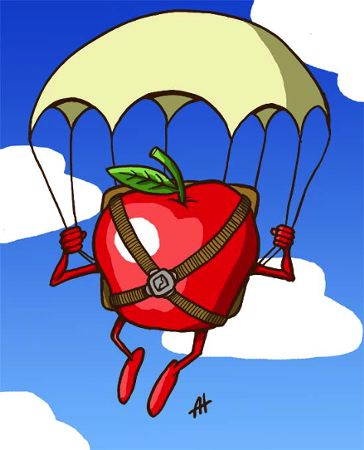 Image found from Alex Huges Cartoons and Caricatures, a really fun site. I recommend a visit.

Oddly enough, this post actually sorta fits with this week’s Theme Thursday, which is book, so we’ll call it good.