And Yo Mama Too!

And Yo Mama Too!

Last week I was presented with a large amount of challenges in my young and budding career with The New Employer.

Things have gone pretty well so far, and I’ve been able to tuck a few successes under my belt. My boss seems reasonably happy with my work. I’ve even gotten a few kudos from other teams.

I’d say I’ve been doing a decent job, still learning, still growing. All in all, I’d give my performance over the past eight months a solid B. Maybe even as much as a B+

Enter the events of last week. I’ll spare you the details, but I came up against a very volatile and angry person at one of our offices in an undisclosed Asian country. I’ll be a bit dodgy about details as that seems to make best sense in this public forum.

I have to admit, honestly, I have now encountered one of the biggest bullies I’ve ever run across in my little life.

And by “biggest” I don’t mean in physical stature.

I can remember only once during my schooldays where I was bullied. A girl who was my friend in elementary school fell in with a bad crowd in mid-school. She started making threatening calls to the house. She promised to beat me up if I didn’t stop looking at her funny. (has she met me? I always look funny! I was born that way, waka-waka…thanks folks I’ll be here all week…tip your waitress…)

On one of these awful calls with me crying and my former friend acting hateful, my mom pulled the phone out of my hand and had a good solid conversation with the girl. As soon as my mom interceded, the bullying ceased.

Honestly, that’s about the worst I’ve ever had to deal with. Until now.

Who could imagine that my worst bully would arise when I’m in my forties? I sure didn’t. I thought I was past all of that B.S. once I hit adulthood.

This gent is an angry, unreasonable man. I try to be open and work with him, and he says really awful things in return. Long hateful emails in which he calls into question me, my management abilities, the capabilities of my team, and perhaps whether I’m best suited for the role in which my employer hired me.

And every time he sends a vitriol filled note, he copies a higher level of my management team in on the action. By way of the dreaded cc field, he’s making a case to those who control my destiny that I’m a complete idiot.

Today I was looking in the company directory to get this guy’s contact information. I agreed with my boss earlier today that I’m going to call him directly to try to sort this out. The best way to deal with a bully is to face them head on, and I’m gonna do so.

I happened to notice that not only does this fine fellow live in the same country as my hardworking ex-pat big brother, he even works in the same large office towers.

So here’s the question: Am I too old to ask my big brother go beat someone up? 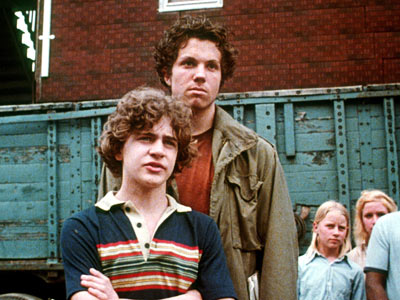 C’mon, how great was that movie “My Bodyguard“? Loved that movie. Just noticed on IMDB that it came out in 1980. Damn I’m old.

In case you were wondering, my boss is awesome and has been very supportive through all of this. I know that the real bodyguard lies within my boss and my amazing management team. I’ve watched my VP smack someone down before. It was brutal and final, so I’m certain she won’t let this mess go on much further.