Beginning at the End

Beginning at the End

When I have had a big event, a big adventure or just something interesting happen in my life, I almost always have to spend a little time processing it, usually out loud and on these pages.

Having just returned from a weeklong trip to Ireland, I’m pretty sure that readers here will be treated to (tormented by?) several posts about my days in Dublin. I had such a wonderful time and I want to get all the stories out and onto the page.

The thing is, I usually don’t get a say in where to begin telling a story. The Muse has a mind of her own and she tends to open one sliding door in my mind to show me what she’s interested in, while keeping the other doors firmly closed until she’s good and ready.

What I mean today is that there is one story, one experience, that keeps replaying in my mind. It is the sum of my entire view of Ireland and probably belongs at the end of the entire tale.

But why cave to the convention of putting the end of the story at the end? This is what I want to write, so this is what will be written. For today, at least.

The hotel where I stayed was in a rather upscale suburb of Dublin named Donnybrook. Back in the day, Donnybrook used to be the scene of an event called the Donnybrook Fair. And by “back in the day”, I mean like the 1200’s through the 1800s.

Evidently that event turned from a nice twelve-day fair, fun for the whole family, to a drunken brawling event. In fact the very word donnybrook has come to mean a brawl or fracas.

The Catholic Church took a dim view of this debauchery (as they are wont to do) and ultimately lobbied for the fair to shut down, mainly by building a church right at the event site.

This is a great story, I love it, but it’s kind of tangential. Let me get back on track. In this wonderful Donnybrook neighborhood, there are quite a few shops, restaurants and a couple pubs.

One of the pubs, named McCloskey’s, was about a half a block away from where I was staying. I could see it from the window in my hotel room. 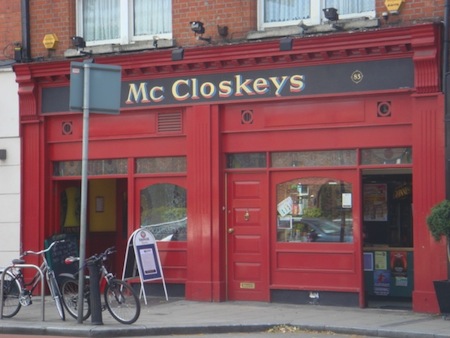 
I had walked past the place quite a few times but was never brave enough to go in. Something about genuine pubs kind of intimidates me. It’s a mix of the expected amount of hesitation being a woman going into a bar alone, and my propensity to overworry that I’ll somehow say or do something that breaks the unwritten protocol of the pub.

I also never am sure how Americans are perceived so it’s always a little tentative for me. Which is silly because of the pubs I’ve encountered in the UK and now Ireland, it’s always been a lovely experience.

On Thursday after what had been a busy and intense workweek, I decided to go inside McCloskey’s. I was hungry, I love pub food, and I was in desperate need of a pint.

With a deep breath, I opened the door and went in. I walked the length of the place to give it a look-see and decided to stay, taking up a corner seat at the bar.

The bartender was a fireplug of a man, in his early fifties, with a pugilistic look about him and a vibe that was clear he knew how to run a pub. He could and would toss your ass out without hesitation and with force.

He came over and slid a napkin on the bar like skipping a rock and asked, “What’ll you have?”

“A pint of Guinness,” I replied with confidence. He nodded with a grunt and poured the beer. In hindsight, I should have just said “A Guinness,” the pint is understood.

What a lovely pint it was. A perfect pour, the perfect temperature, perfect creamy foam on top. Oh yes. I wanted to take a picture of it so I could always remember that beautiful moment, but thought better of it. It felt like the bartender may take a dim view of selfies and Instagram in his pub.

As he set the pint down I asked, “Can I order some food?”

“Er, yeah, we have a stew, the fish and something else I can’t remember” he said.

“Fish and chips, you know?”

He grunted again and went off to the kitchen to place the order. I sat there feeling tense and sipping my beer. There were really only about four people in the pub, all quietly drinking and keeping to themselves. 1970’s disco played from a small boom box to fill the atmosphere.

Next to me was a stack of local newspapers so I picked one up and read it, giving me something to do as I sat alone and tried to act normal.

After a bit my food came and it was so delicious. Light and crispy cod, perfect chips and slices of tomato. I ate it joyfully and drank my Guinness and suddenly everything was really right with the world.

During this time, the bartender mostly ignored me. He was friendly but distant. Gruff but fair, I suppose, and that was fine.

While I ate, a group of people came in. They were obviously all family, and they took up chairs and seats around several tables. Then more and more kept arriving. There were probably twenty or more people and one older gentleman with graying hair was buying all the drinks.

These folks were all in a good mood and talking excitedly. At one point someone teased the older man about “never being around” and he tipped his pint glass to them and said, “now that’s one thing you can never say about my term! My opponent can’t say the same.”

It was then I sussed out that this might be a local politician. I heard someone call him by his first name and as I was texting the play by play to The Good Man, he did a quick Google search and we discovered I was in the pub with the local councilman. Elections were due to be held the next day. My guess is he was out celebrating the end of his campaign run with friends and family.

As the crowd grew, it became such a convivial atmosphere. I sat next to one of his daughters and we chatted and laughed. Her son, who looked to be about five, ordered a cranberry juice and wanted it served in a Guinness pint glass. Everyone bought and ate small cans of Pringles.

As ever more people kept piling in, I kind of felt like I needed to get out of there. I’m sure I could have stayed and been fine, but I started to feel like an outsider.

So I hopped up from my barstool and went over the cash register where the bartender stood. He turned to me and I said, “I’d like to tab out, please.”

“Oh sure,” he replied and began ringing me up.

“That will be twelve euros fifty,” he said. I handed him a twenty euro bill.

He took it and looked me, touched my hand and said, “You doing okay, darlin’? Was everything all right?” with genuine concern in his eyes.

I replied, “Yes, it was great. I’m…I’m just a little jet lagged and very low energy.”

He had a sparkle in his eye when he smiled, then tapped my hand again and said, “That’s okay, darlin’, you still look gorgeous!” He laughed like a schoolboy while he got my change.

He put the bills and coins in my palm and said, “now you have a good night, eh?”

I left the pub with a smile on my face. Now that, the whole story and everything in it, that’s Ireland to me.

It is a wonderful, charming and friendly place. I loved every minute of the time I spent in the city of Dublin and the district of Donnybrook. 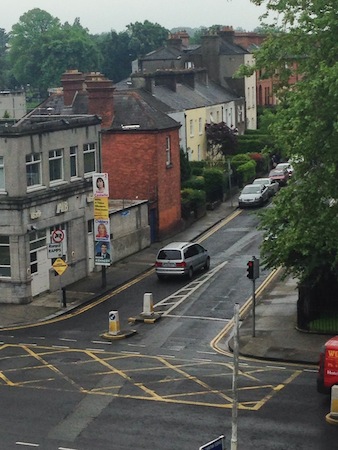 A view from my hotel room. Lovely! Copyright © Karen Fayeth, 2014