When I travel internationally (or even in the US) I know I have to find many ways to distract my monkey brain. Sitting still in a seat for flights that last anywhere from six hours to sixteen hours means I have to bring a lot of toys and distractions on an airplane to keep me sane.

Lately the best and easiest distraction for me is to load my iPad with movies. Good long movies that will help me while away the hours.

On this recent round trip to Ireland, I had four movies on my iPad and watched two more on the plane. Six movies, all told, have been absorbed into the ol’ brain pan.

They were: “American Hustle” (awesome movie!), “Don John” (far better than I had expected), “The Great Gastby” (far worse than I had expected), “The Secret Life of Walter Mitty” (way better than expected as I expected to fully hate it), “August: Osage County” (was a little hard to watch, hits too close to home and is rather depressing), and “The Wolf of Wallstreet” (eh, I was lukewarm).

So as I found myself locked and loaded and flying the skies, it was kind of funny to stumble across not one but two references to my fair New Mexico in these movies. A little “hello” from my homestate as I flew thousands of miles away.

The first was in American Hustle. (spoiler alert!) The character Sydney (Amy Adams) has been affecting a British accent and a faked up backstory of being a British aristocrat and finally has to come clean. She and Irving (Christian Bale) are fighting and she admits not only is she not British with ties to banking and business in England, she’s actually just a girl from Albuquerque, New Mexico.

This made me pause. What am I to take from this? She’s not a big time global force, but a simple girl from New Mexico?

Or do I infer that she learned her hustle in New Mexico? Hell, I don’t know and really it doesn’t matter, but it was a little startling to hear the name Albuquerque casually tossed about. However, I was a happy for the name check of my hometown in a big time movie. The Sydney character is pretty cool.

The other reference came along in “The Great Gatsby” when Tom is riding in a car with Jordan and speaking ill of Gatsby, as they have just had an unpleasant encounter in a hotel room in New York City. Tom is apoplectic and the dialogue goes something like this (parentheses added by me to make the speaker clear):

“An Oxford man!” He was incredulous. “Like hell he is! He wears a pink suit.” (said Tom)
“Nevertheless he’s an Oxford man.” (said Jordan)
“Oxford, New Mexico,” snorted Tom contemptuously, “or something like that.”

From that exchange I certainly could infer what was being said. Oxford, New Mexico said contemptuously. As though New Mexico is the most backwater place a rich man from East Egg can think of.

That one made me wince a little, even as I was pleasantly startled to hear New Mexico called out again, in another movie.

A little research showed me that this dialogue is in the actual book by F. Scott Fitzgerald, which I read a thousand years ago and didn’t remember this.

But there it was, in a blockbuster movie!

I’m not entirely sure why New Mexico is in the zeitgeist these days, maybe it’s chalked up to “Breaking Bad” or maybe it’s something else, but hey here we are in the big time. 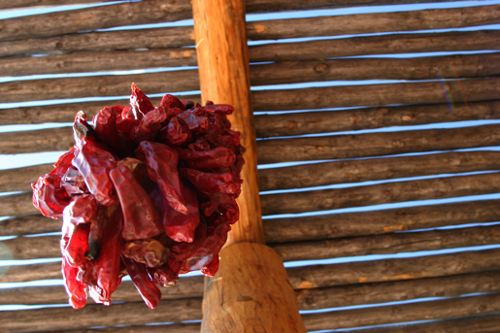 Went back to the very first post on this blog to snag this photo, one of mine. It just seemed right.

Photo of ristra Copyright © 2007, Karen Fayeth, and subject to the Creative Commons license in the far right column of this page.