A Pirate Looks at Forty-Five

A Pirate Looks at Forty-Five

Mother, mother ocean, after all the years I’ve found
My occupational hazard being (that) my occupation’s just not around
I feel like I’ve drowned, gonna head uptown

–“A Pirate Looks at Forty” by Jimmy Buffet

Yeah, I might be taking a few liberties with a very fine Jimmy Buffet song that did not make a lot of sense to me when I was in my twenties and seems rather spot on now.

I find myself sneaking up rather quickly on the milestone age of forty-five. Or rather it’s sneaking up on me. What a milestone, I’m not even sure what it means. There are ages old enough to vote, old enough to drink, and then it all kind of gets muddled after that.

And so weirdly (or not so weirdly) enough I have been thinking about that Buffet song dating back to the jolly era of 1975. The song is about a man who laments the fact that he was born too late to be a pirate. Jack Sparrow kind of pirate, not Somalia kind of pirate.

The man in the lyrics looks at his life and wonders what might have been. I have a very rich internal life and while I love my life today, I do often think about the what-ifs.

Yo ho ho, the pirate life isn’t quite the one for me, but I do have laments of being born too late. A hazard of the years going by, I suppose.

I’m not so unlike the main character in “Midnight in Paris” who wishes to live in the era where writers were valued and were paid quite well for their work. Where art wasn’t as much of a business as it is today.

I recently read a biography of Zelda Fitzgerald and grew ever more green with envy over how Scott Fitzgerald could keep them in a very high life simply by writing and publishing a few short stories.

I’m not implying he didn’t work hard at his craft. I’ve read some of his shorter works and of course “The Great Gatsby” and the man could write. But he also had a venue for those stories, popular magazines that were both willing and able to pay.

Oh to live a life where I could install myself in a Parisian pub with a bottle of Spanish red and write my words. Then know I might get many rejections, but when I get that “yes” that it really meant something on a large scale.

I was singing this sort of tune in my head over the weekend and because Fate is one hell of a comedian, I received an acceptance on an essay I had submitted to a very fine online publication. I am quite proud to contribute to this literary magazine, but the timing couldn’t have been more humorous.

One of my coworkers recently had occasion to read one of my published short stories about a scuba diver (if you haven’t read it, I’ll direct you to the right column of this page). She is also a scuba diver and she liked the story very much.

“You are such a talented writer! Why do you do this job?” she asked, and laughed.

“Because that doesn’t pay, and this does,” I said and sighed.

Oh, it could. Maybe one day. With a lot of work and a lot of sweat and a lot of blood and a mountain of rejection letters under my feet.

But as I sidle up to age forty-five, it sometimes feels like my best years have passed.

I once knew a bluesman who could play a muddy, gorgeous telecaster like he was drinking water. He made it look easy. So easy people were always sure they could do it like he did, and when they wondered aloud to him why it was so hard, they would say, “You must have just been born talented.”

He would reply, “Yeah, and at age twelve I picked up a guitar and played it every day until my fingers bled, and then every day since.”

Talent is nothing without hard work. I am more than happy to do the work, and I actually do the work every day. I type my words until my wrist aches and my head hurts. Then I write some more.

There are many days I simply wish I had started writing seriously earlier in my life when energy and time were not an issue. Then again, what did a bubbleheaded girl like me have to write about?

Maybe I had to live a little before I could open a vein and write the words.

Oh well, this is my journey. Not anyone else’s. Forty-five it is and forty-five it must be.

The dread leading up to the day started to wane in the final days. Resignation set in and now I suppose I’m okay. I tried on forty-five and it fit like a shiny new pair of fine leather shoes. A little tight and squeaky at first, but breaking in nicely. 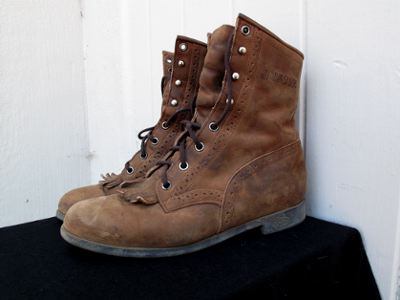 If I’m going to overwork a metaphor, I should probably reuse a photo of a very favorite pair of well broken in boots

Image Copyright © 2010, Karen Fayeth, and subject to the Creative Commons license in the right column of this page.