On one of my free days while in the world class city of Singapore, The Good Man and I had occasion to visit a little touristy spot called the Buddha Tooth Relic Temple and Museum in Singapore’s Chinatown district.

It is a profoundly beautiful place, filled to the gills with statues of various forms of the Buddha.

Along one wall there was a display of what they called guardian Buddhas.

So, based on your sign under the Chinese Zodiac, there was a Buddha assigned to be your guide.

Ok, fair enough. Each guardian was rendered in a beautiful, colorful statue and surrounded by tiny Buddha statues.

So while I don’t always believe in stuff like the zodiac, Chinese or otherwise, I figure if there’s a benevolent entity who is going to be on the look out for my often troublesome self, well, why not give that at least a passing nod, hey?

I walked down the line of Buddhas, all gazing out into space, showing different hand and tool configurations.

Then I came across the Buddha that represents me:

Yeah. I, um, called him the Red Ass Buddha until The Good Man told me to cut it out since that’s disrespectful. I said most Buddhists I know are very calm and have a great sense of humor. He wasn’t buying it so I stopped.

But look at that face! The snaggly teeth. The blue skin. The stick in his hand and what is that? A cat-o-nine tails or something? And the flames? Oh the flames!

My goodness. He’s quite a high maintenance looking Buddha. It was sort of odd to see this guy as just the day prior I had well and truly ripped one of my under performing suppliers a brand new pooping chute. I had later felt a couple moments of remorse about it.

Then I saw this guy and was like “No, I was right to do what I did. Red Ass Buddha would approve.”

So I snapped a photo and put some money in the donation box under his area. 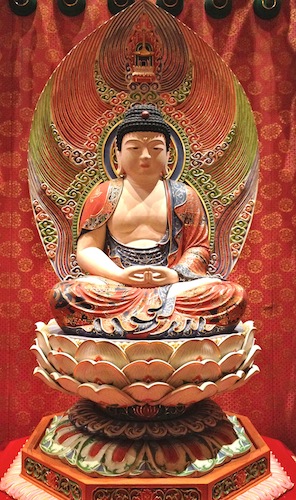 Yeah. That calm guy. Hands all up in a mudra. Mellow colors in a shell behind him. Thoughtful.

Looking at these two statues sitting side by side became sort of a metaphor for our relationship.

Me all red ass and reaching out with that bapping stick to whack some folks around. The Good Man all calm, thoughtful and serene. The yin to my yang.

Maybe, perhaps, kinda sorta there might be something to this whole Chinese zodiac thing?

Images Copyright 2012, Karen Fayeth, and subject to the Creative Commons license in the far right column of this page. Taken with an iPhone4s and the Camera+ app.