Part III in a series.

So of course, one of the things I miss the most about my fair New Mexico is the food. It is unlike anything else in the world and as a native, the green chile flows in my veins.

Too much California time and I start to get a little pale, weak and shaky. I survive by cooking my own New Mexican food and that ties me over pretty darn well. But it’s not the same as being home.

From my first footstep on hallowed and dusty New Mexico ground and I was ready for some good eats.

I would have to wait for a good greasy restaurant meal, however. First stop on our tour was to go to see my best friend’s little sister who is a very dear friend in her own right.

Her three kids are growing too fast and I really couldn’t believe how time has flown. I guess that is how we mark time as adults, by how fast the kids grow?

After hugs and “it’s been too long!” we all loaded up in a Suburban and headed over to the nearby little league fields to watch her oldest son, who is ten, play a little baseball.

It’s pretty well documented how much I love baseball, so I had a great time watching the kids try to learn how to put it all together. I haven’t laughed that hard in a long time.

My friend’s husband was the umpire for the game, so of course Blue got a hearty ration of crap from us in the stands. “Use the good eye, Blue!” And I boo’d him when he called his own son out on strike three looking. That ain’t right to ring up your kid! LOL!

Thankfully he has a good sense of humor and is a very kind man. Also, he can dish out it just as well as he can take it.

Later that evening we ate together and had a wonderful home cooked meal. There was a nice bowl of chopped green chile to add to our good eats and I knew every little thing was going to be all right. Well, that and the four adults knocked back a few glasses of Mimbres Red and got a real good cuss and discuss going.

It was a good place to be, a very good place. This was one of those rare times and places in the world where I was able to simply be nothing other than my true self. No hiding my words, no trying to show off, no being circumspect. Simply 100% me because I know these people are family, and for well over twenty-five years they have accepted me just as I am. It gives me peace.

The next day we got it all together and got back into the ‘burb. We continued our journey by heading north to Santa Fe. Once we got settled into our hotel, my best friend remembered a restaurant that her husband recommended was located nearby, so we loaded up.

The place is called PC’s Restaurant Lounge and their menu included something called an Indian Taco. We used to call them Navajo Tacos, and they really are something special.

For the uninitiated, a Navajo Taco is a piece of Indian Fry Bread that is loaded with all the ingredients of a taco then covered in green chile and melted cheese.

Heaven on a plate.

These are not as common on the menus of Southern New Mexico and I haven’t had one in a long time. I hopped right on ordering this and giggled with anticipation.

I’ll save the suspense, it was galldang delicious. (Lactose intolerance be damned!) 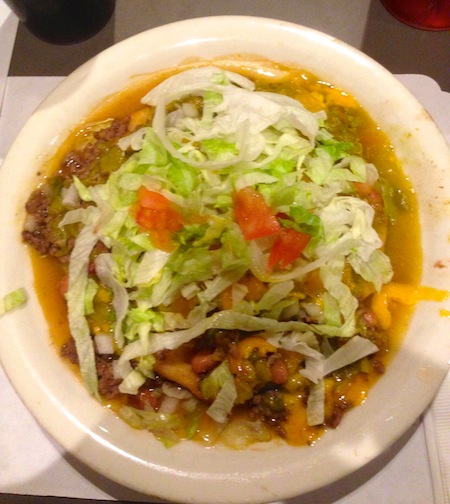 Terrible photo of a terrific meal.

A beautiful combination of Mexican food and Native American food, right on my plate, into my tummy, into my veins, sustenance for my very soul.

This should be the State Dish of New Mexico because it perfectly describes our blending of cultures and the New Mexican’s love of a good meal.

Of course, I was a useless lump of lard for the rest of the day after this meal. My salad-and-a-little-exercise body was quite confused but mostly pleased. A nice lunch like that makes a siesta real easy and full of nice dreams.

The next day we managed to pull ourselves up and out the door and we explored the Plaza in Santa Fe. We shopped and strolled and touristed. Because why not?

I really enjoyed absorbing everything, recharging the batteries, and remembering when these feet last strolled the same sidewalks. So familiar. So different.

When it was time for lunch my friend suggested we go to an Indian place to eat.

“India Indian?” I asked, because one can never be too sure in New Mexico. She laughed, but she was very serious. She wanted to take me to an Indian (i.e. Central Asian) restaurant in the middle of Santa Fe.

Yes. We went to a little place named India Palace and had their lunch buffet.

Ooooh damn. That was some of the best Indian food I’ve ever had. I live in the Bay Area and there are a lot (and by a lot, I mean A LOT) of good Indian food places here. And you know what? India Palace in Santa Fe, New Mexico beat them all.

I know, right? You may be saying, “C’mon, really?” Yes. Really. Sadly I was too busy shoving Saag and Paneer Masala down my gullet to stop and take a snapshot of such gorgeously delicious food.

Good eats are good eats and I sure had ’em in New Mexico. Damn, I ate well. There were a few of things I had wanted to get to while I was there and I missed out. Like good old fashioned Sangria (a restaurant in Santa Fe that sadly isn’t there anymore called La Tertulia served the best I ever had) and carne adovada, and sopaipillas.

Oh well. I guess that gives me more to look forward on the next visit? And incentivizes me to make that next visit happen very, very soon.

Side Note: I just looked at the Wikipedia page for sopaipillas.

In that entry, it says the following:

“A simple imitation of a sopaipilla can be made by frying a flour tortilla until it puffs up then cutting it into triangles and serving with honey.”

Um. No. No it can’t. No it absolutely cannot. A puffy tortilla and a sopaipilla are absolutely NOT THE SAME THING. I am highly offended it was even suggested. Mo’flicking Wikipedia full of lies and insanity.

Ok, let’s get back on track here. While your mind reels over that sopaipilla madness, rest your eyes on this photo of my older goddaughter’s green chile chicken enchiladas, a perennial favorite of mine. Yum! 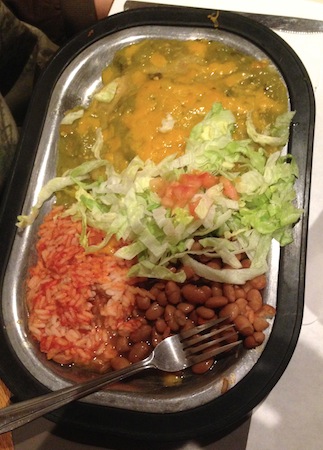 Yes, apparently while in New Mexico, I am a hipster freak photographing my food.

Coming up next: Part IV, The More Things Change

Images Copyright © 2014 Karen Fayeth, and subject to the Creative Commons license in the right column of this page. Taken with an iPhone5 and the Camera+ app.