Part II in a series.


Today I continue my New Mexico storytelling with Part II. I guess my short trip to New Mexico last week takes more than one post to discuss.

At four days, it was a quick trip, too quick if you ask me, and even though time elapsed fast, there was an indelible impression left upon me. New Mexico kind of does that to a person, right?

The last time I had been north of Las Cruces was in 2009, so it wasn’t that long ago, but certainly long enough ago to change my worldview.

Back then I was newly married (yay!), had endured one of the worst years of my professional life (boo!). I found myself without a job, without any leads, and a little dislocated as I learned how to be both unemployed and married. Both being something I had never before experienced.

I returned to the homeland last week on a warm Spring Saturday with almost six years of marriage tucked under my belt and a really good job that I love very much. Time really does heal wounds.

To be honest, sometimes I still feel very dislocated. Caught somewhere in between. I am a New Mexican, through and through, but it has now been almost seventeen years that I have lived in California. My god. Seventeen. Where the hell did all those years go?

So I am not really a New Mexican anymore, but I’m seriously not a Californian either. What, exactly, am I? I don’t know and that’s the problem.

(Apparently this is a long running theme for me, here’s something from the archives.)


My best friend and goddaughters were on their Spring Break and wanted to make a trip to Santa Fe. As near as I can recall, the last time I was in Santa Fe I was somewhere in my twenties. Well, that’s not entirely true. I went to the outskirts of Santa Fe in 2009 because my father is buried there, at the National Cemetery.

But that last time I had been on the Plaza? Yeeks. I was of drinking age, but not old enough to know better, certainly.

Let’s just say, it’s been a while.

Santa Fe was, well, Santa Fe. She has changed in many ways. She has not changed at all in other ways.

Of course, one of the first places I had to visit was the Loretto Chapel. I have always loved that place, from the time I was a small child to now.

I had wanted so much to get married there, I mean, I really wanted that, but logistics being what they are, it just couldn’t happen.

(I am more than thrilled with where and how we did get married in California, by the by.)

In my mind, my child’s mind, the Loretto chapel was teeny tiny and the stairs were at the very back wall of the chapel. I was pleasantly surprised to see the chapel is actually larger than I remembered, with several rows of pews behind the very famous staircase.

So of course I took an unremarkable photo of the remarkable treasure. A photo from the same vantage point where everyone snaps the shutter, from behind the worn velvet ropes. It’s a bit like the Golden Gate Bridge. It’s been done. To death. It’s hard to do it any differently than the thousands who came before.

But that’s ok. I took the photo for me. A memory. An image that I don’t have to expend a calorie trying to conjure up in my mind. I can ease my brain and rest my eyes and smile fondly to see this photo. 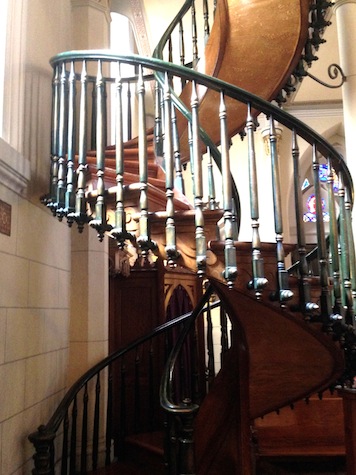 While in Santa Fe, we also went to the Cathedral Basilica of Saint Francis. Where Loretto is small, the Basilica is gigantic. Overwhelming in its proportions.

I took a lot of photos and absorbed all of my surroundings. 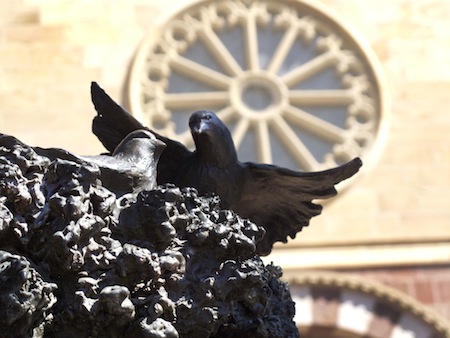 A bird at the base of a statue of Saint Francis and the Basilica’s rose window in the background.

Of course, I have a lot of mixed feelings about being raised Catholic, but that is not something to discuss here. I do try to stay away from religion and politics on the blog, though I don’t always succeed.

That said, I have always loved the iconography of the Catholic church and being raised in the Hispanic culture means all of those images hold a lot of power for me. The images are not just religious but part of our culture and folk art. It has shown up in a lot of my own work.

I have been obsessed for a long time with the image of a flaming heart and also a heart with a crown over it. Of course this is the Sagrado Corazón, found on paintings and statues and sculptures.

Being in such a beautiful space and being in Santa Fe and seeing all of these reminders of my childhood made me need to sit down. Just sit and be quiet. And think. And absorb.

My two godkids had a lot of questions for me about the Catholic Church and what some of the images mean. The Stations of the Cross proved to be a place of fear for my younger godkid, and I tried to explain that it was telling a story, certainly a sad story, but that it had a happy ending.

Meanwhile my thoughts raged with questions like, “Who am I?” and “Why don’t I know?” and “Why have I had this lost feeling for such a long time?”

Questions as unanswerable as some of the challenges posed by my beautiful girls.

I love New Mexico and inside of me something is able to rest when I am there, but to be honest there is another part of me (that has been there all of my life) that cannot rest, and needs more than New Mexico can give.

The only place that I truly know is home is anywhere The Good Man happens to be. That, I think, was my best comfort while the thoughts and feelings swirled like an eastern New Mexico tornado through my brain.

Images Copyright © 2014 Karen Fayeth, and subject to the Creative Commons license in the right column of this page. The Loretto staircase was taken with an iPhone5 and the Camera+ app. The little bird was taken with a Canon G10 and some crawling around on the ground.