So here I find myself at Friday, the end of the first long work week after my return from a fantastic vacation.

I’m a little tired, a little stressed, a little melancholy. A week ago today The Good Man and I were walking the High Line in Chelsea and feeling relaxed and happy.

Today I’m sitting at a desk feeling anything but relaxed and happy.

And so to curate the memories from my time off just a little while longer, I’ve decided to write a review column.

While in New York, The Good Man and I took in three Broadway shows. Below are my reviews of the three shows, presented in the chronological order in which they were viewed.

And away we go:

The Good Man and I arrived in New York in the early evening on Saturday and so we simply had some good food and slept. Sunday we started exploring, and late in the afternoon, decided to hop over to the TKTS booth to see what sort of Broadway tickets we might scare up.

Most of the shows were already sold out, but The Anarchist still had seats available. The show was still in previews and the opening wasn’t until the following Saturday. The play was written and directed by David Mamet, he of the Glengarry Glen Ross fame and a well known and well respected playwright.

Basically, we reasoned to ourselves, a new Mamet play with two amazing performers should, by all accounts, be worth seeing.

So we plunked down the cash and went to the show.

I knew going in that any Mamet show was going to have a lot of talking and not a lot of doing. Oh dear god. I had no idea what was in store for me.

Here I’ll borrow someone else‘s words to set the background:

The play is set in a prison. LuPone is Cathy, an anarchist who had shot police officers and has been in prison for 35 years. Winger’s role, as Ann, is less clear. She is probably a prison psychiatrist. Ann asks questions and Cathy answers, philosophizing about religion, the meaning of life and redemption.

Naturally, Cathy wants out. She wants to see her father before he dies and argues that she has served her time.

Ann keeps asking her where one of her accomplices is, and Cathy says she does not know. Ann asks her about redemption and about being born a Jew who has been reborn a Christian in prison. They talk about it and then talk some more.

The show began as most Mamet works do, right in the middle of the conversation. You as an audience member have no context. You just gotta run, hop on and don’t ask too many questions.

The freight train sped along for just seventy minutes then abruptly stopped.

We in the audience applauded because the performers did the best they could with the material.

Then when we stopped clapping, we all looked at each other like “what the hell just happened?”

My biggest fear at that moment was that The Good Man was going to turn to me and say “wasn’t that great!?!?!”

Afterwards, over an egg cream, we talked about the show. At first I felt really disappointed in the whole thing, then I got a little mad.

Mr. Mamet has always been massively self-indulgent in his works, but this went beyond the pale. And that he forced two fine actors to rattle through his haphazard script is pretty much a crime.

Basically, this whole thing left a really bad taste in my mouth. Isn’t Broadway supposed to be the best of live theatre?

(A final note: Just this week, in the wake of the official opening on December 1, the show has received awful reviews and will close December 16th after just 17 regular performances. Seems it wasn’t only The Good Man and I that were put off the show.) 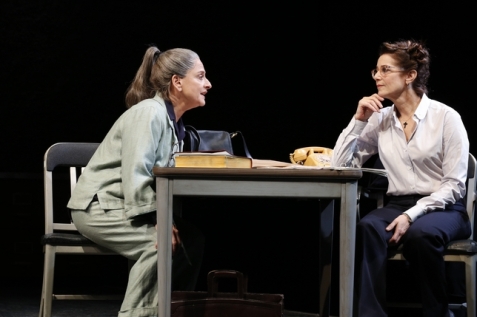 Nice Work If You Can Get It


Two days after the disaster on 45th street, The Good Man and I dove back into the fray.

We visited the TKTS booth again and this time picked up tickets to the show Nice Work If You Can Get It.

This combined two happy elements for us. The book is inspired by some of the works of PG Wodehouse, he of Jeeves and Wooster fame and author of hundreds of hilariously funny books, and the music and lyrics of Gershwin.

Oh, and it stars Matthew Broderick.

As an aside, as we were stepping up to the ticket taker at the very doors of the theatre, he said to me “hang on a moment” and from behind the door came Mr. Broderick’s wife, Sarah Jessica Parker. She was extraordinarily nice to everyone, thanked the man taking tickets, said excuse me to us and made her way out. She must have stopped by for a quick pre-show “break a leg” to the hubby.

As she walked away, The Good Man commented, “wow, she’s really cute in person” and I totally agreed. She is actually quite adorable in real life and very sweet. I think the camera does her little justice, actually.

After the star sighting, we found out seats. As the curtain went up, both The Good Man and I had very high expectations for the show.

And not only were these skyscraper high expectations met, but also blown right past. (< - terrible grammar, and yet I don't care) Set in Prohibition era New York, the show had a zany story line that roughly centers around a rich guy on the eve of his third marriage who, stumbling home sauced after his bachelor party, bumps into a sassy bootlegging girl, and is a bit taken with her. Through a series of funny events, the bootleggers end up hiding their gin in the basement of the rich man's Long Island home ("I never go there"). When the man and his new wacky wife show up to honeymoon at the same home, they end up surprising the bootleggers. Lots of singing, tons of dancing and a lot of hilarity ensues. The cast is amazingly talented and the show just flowed beautifully from start to finish. Mr. Broderick really can do anything, can't he? Sing, dance, act, theater, television, movies. All of it. And while Mr. Broderick was the most well known actor in the cast, really Kelli O'Hara is the star of the show. She is luminous and definitely enchanting. Hell, by the end of the show I was ready to marry her! What a great show and what a great way to regain my trust in the quality of the shows on Broadway.

We had seen War Horse here in San Francisco and it really resonated with me on a very deep level.

In fact, The Good Man and I had been talking for a long time about a trip to New York, and it was my desire to see War Horse on Broadway that became the motivating factor.

I didn’t want no TKTS who knows what seats we’ll get scenario. I insisted The Good Man buy tickets early and get the best seats he could.

Oh boy did he. Second row. From start to finish we were right in the middle of the action.

Since New York’s Lincoln Center has a pretty big stage, the production was a little different than in San Francisco and in many ways the performance was far better.

Whereas when I saw the show at The Curran in San Francisco, we sat quite a bit back and I was very into the storyline of the horses, meaning I stared at them the whole time and the actors were secondary.

Being so up close this time, the puppet horses simply integrated into the scenes and I was all up in the middle of the characters and their story. Being able to see facial expressions and quite literally sit in the middle of the action was a profoundly different experience.

As with the last time, I was completely engaged in every moment of the show and when “the big sad part” came along I did again cry my eyes out, but it was so much more real this second time. When the lights came up I had dried up my eyes, then immediately started crying again. Then I stifled it and went to the restroom to clean up. And so I cried again.

All of this crying occurred even knowing what was going to happen and when. And knowing how the situation resolved itself.

There is really something about the crucial scene when Joey, our lead horse, is caught in the barb wire on the battlefield that about does me in. I should probably hire a qualified therapist and figure that out. It just demolishes me. (and that’s good theatre, folks!)

As The Good Man hugged me while I wailed like a baby, I said to him, “I don’t think I can do this again.”

My goal after seeing the show in San Francisco was to see it again in New York, then see it a final time in London. But have mercy, I don’t think I can go through that again.

What an amazing show. For anyone reading this who may say, “Oh, just watch the movie” I say no. Absolutely not. The magic of this show is the amazing puppetry of the animals. This play is the story of World War I told from the view of a horse which makes it groundbreaking. It’s the puppetry of the horses that makes it exceptional, and there is no way a movie using real horses can even come close.

Whew, just thinking about it again gets the tears burning at the sides of my eyes. It is just so profoundly good.

Our original plan after the show was to go to Rockefeller Center to watch the tree lighting. No way that was going to happen as I was a soppy mess, so we tucked into a family run pizza joint and noshed and kibitzed with the owner and watched the lighting on TV.

Yeah, pretty much among the top five most amazing days of my life.

Ok, well there you have it. What I wouldn’t give to have the kind of time and money to go back to New York and see every single show on Broadway. I’d love every single ding dang minute of it.

Well that’s that, and my lunch hour is over. Back to the salt mines.

Oh, I see I have eight new emails from the Boss Man. How fun.