Shortest Distance Between Two Points is a Little Black Jeep

Shortest Distance Between Two Points is a Little Black Jeep

This week I was back at my employer’s office location in the greater Sacramento area. I have such a mental block about making the drive up there because the first time I ever went to Sacramento almost ten years ago, I left on a Friday afternoon and it was an awful, hellacious drive.

And ever since, the drive just seems equally hellacious.

When people ask me how far away is Sacramento, I usually say “oh, about two hours.” But that’s not really true.

In the office this week, I was chatting with a coworker who lives there. He’d asked how the drive went, and I told him it was pretty bad. There were three different accidents in varied locations that had backed up traffic in all kinds of directions. So the trip took me three and a half hours.

My coworker replied, “Yeah, I always figure it’s going to be a three hour ride, no matter what.”

I can get from Albuquerque to Las Cruces in three hours, I thought to my little self.

Then I looked up the distance from the mid-Peninsula to the Sacramento suburb where I was visiting.

So I embarked on some math. It hurt my head and made me wobbly on my pins, but math was necessary.

My average speed is 41.6 freaking miles per hour!

So if that’s an average, that means sometimes I’m going 65 mph, which is the posted speed limit…

And sometimes I’m going squappity mph because I’m at a standstill at Emeryville, moving real, real slow on the approach to the Bay Bridge, or stuck on that freaking causeway staring at the back of a semi-truck that’s belching black smoke and wondering WHY GOD WHY do I have to drive to Sacramento!?

41.6 freaking miles an hour. No wonder this drive is so tortured. To paraphrase that bard of modern times, Sammy Hagar, I can’t drive forty-one.

I like to drive and go. I don’t like stop and go. Go and go, that’s my motto.

I guess it’s a where-you-were-raised issue. In New Mexico, if I go 224 miles in three hours, that is one mile every 80 seconds which means my average speed is 75 miles per hour. Which is the posted speed limit.

Which means sometimes I’m slowing down to make way for other cars and sometimes the New Mexico State Highway Patrol doesn’t really need to know what I’m up to.

If you listen close, you can hear the sound of all of those drivers pounding their heads on the steering wheel. 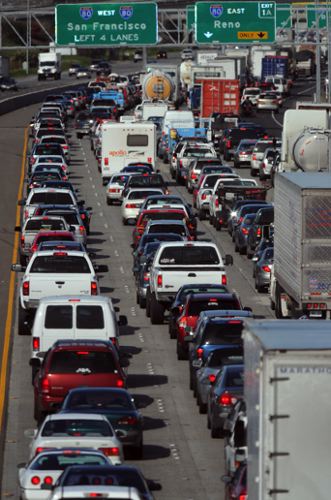 Image from The Sacramento Bee.