Owing to my good Catholic upbringing, it takes very little to toss me to the throes of guilt.

And I have it, baby! Catholic guilt, that is.

And owing to my good Catholic upbringing (tho currently quite non-practicing), confession is good for the soul, right?

Yesterday…I got a speeding ticket. *gasp!*

Yep, I’ve been having crap commutes lately. Yesterday morning my thirty-minute commute took seventy. The night before, stop and go and stop and go and…well, you get the idea.

So I took off early yesterday to 1) avoid the commute and 2) spend more time with The Cute Boy™. So gleeful was I that I guess I put my leaden foot a little too hard on the gas. I say “I guess” because I don’t know for sure, but I do know that a CHP pulled my arse over (and they are NOT as cool as Ponch and John, let me tell you).

The officer glared at me, I guess he has to. God knows what they come up on during traffic stops. He took my license, my registration, my insurance card and wrote up a ticket.

I’ve never gotten a ticket in California. I guess ten years is a pretty good run, eh? My last ticket was in 1994 in New Mexico. I glanced at the ticket to see how much I’d have to pay. It doesn’t work quite that easy here, you get a ticket with a “notice to appear” then I guess they send you a letter where you can either pay some money or go to court.

The nice CHP gentleman did not say he used a radar, so I *could* try to go to court to fight it. A quick Google of the officer’s name turned up that he’s a quite well respected member of the force, and had a nice write up in a local paper for his hard work.

Yeah, I don’t think I’d stand a chance in court.

I found the California fine schedule online. Let’s just say the fine is ouch-worthy. I shall pay the fine and be a lot more cautious about the needle on the ol’ speedometer.

Ok, I guess today I’ll go do an act of contrition or something to help me find my penance (in addition to the pain of writing a check to a state that already way overtaxes me).

My first act of penance was to ride CalTrain to work……..I gave myself a vehicular time out.

Do you think Governor Arnold will grant me absolution?

Edit: Oh no! It’s a conspiracy! The Man trying to bring down the displaced New Mexicans!!! 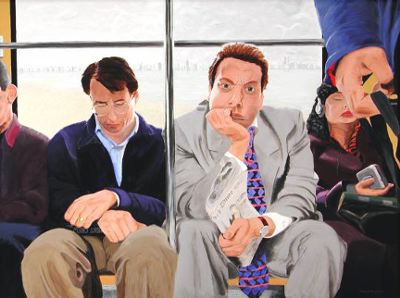