I’ve lazily looked around all the usual suspect news sources for something interesting to pontificate about today. No luck. I’ve hit all my favorite blogs, both political and otherwise. Nothing.

Slow news day? Sure. I could blather about the Red Sox victory over the Indians. And the coming World Series with the Rockies. Nah. Old news, really.

So I’m going to borrow an idea from a rather vain blogger I read (who is NOT from NM, in case you are wondering). Today I’ll recount the media that’s currently swirling around in my world. Just cuz I can.

On my bedside table:

Just finished:
How to Hepburn: Lessons on Living from Kate the Great. Always been a big fan of Katharine Hepburn. Huge. This book is sort of biographical, sort of instructional, focusing more on Kate’s struggles with insecurity and being such an oddball in Hollywood. All in all, though, a great read. Especially if you like Hepburn.

Currently reading:
Lamb: The Gospel According to Biff, Christ’s Childhood Pal. I stumbled across Moore’s darkly funny A Dirty Job: A Novel (about Death. I mean the hooded one.) this summer and laughed my ass off at his real black humor. Plus he’s a Bay Area guy so I was interested. “Biff” was published back in 2002 so I’m quite behind the curve, but this book is so witty, so laugh out loud, so jealous I-wish-I-could-do-that. He makes it seem effortless. He’s got a biting humor with a heart and that’s hard to do. I’ve read so much dreck lately that this book is like a breath of fresh air and I consider it a reward, like dessert, to be able to sit down and read a chapter or two.

Also on my bedside table for when I finish “Biff” is Straight Man by Richard Russo. This will have to be my next read because it is the subject of the November meeting of my local library’s book discussion. Those are some smart well-read folks in that group, so I have to stay on top of my game. It’s supposed to be funny, but I fear after “Biff” it won’t be…we’ll see.

But the one I’m salivating over is Mary Roach’s Spook: Science Tackles the Afterlife. I love, love, love Mary Roach. I became enamored with her from the book Stiff: The Curious Lives of Human Cadavers. It was a well-researched yet wryly funny book. Plus she writes a genuinely funny monthly article in Reader’s Digest of all places. And she makes it work. She adds a lot of light and air to that very stalwart old magazine (that yes, I admit I read…or at least used to. My dad used to gift me with a subscription, but sadly when he passed, my mom decided not to continue the gift). So this one is down in the stack but I’ll get to it. Oh yes I will…..

The Cute Boy™ and I are huge fans of movies so we have an obscenity of DVD’s sitting by the telly right now, begging to be watched.

My secret bon-bon:
Season Two of Grey’s Anatomy. I usually loathe medical shows. I’ve eschewed “ER” for years. But one of my friends at work talks about this show all the time and says that I am the real life Addison (which, watching these early seasons, I realize is NOT a compliment…despite Kate Walsh being haaaawt). I watched an episode about a year back and decided to give it a try. I liked Season One. Season Two not so much. Oh well. I watch this evening soap when The Cute Boy™ is off doing other things. I promised I wouldn’t subject him to it, despite the fact that he knows one of the actors on the show.

My “where the hell have I been?”:
Glengarry Glen Ross. One of The Cute Boy’s™ favorite films. Now I understand why the first time I took him to New Mexico he snickered whenever anyone referred to Rio Rancho. This dates back to 1992 but is a great film. Well acted, great script. Memorable lines. Plus, I work daily with sales weasels in my job, and this was a stunningly good insight into the mind of a desperate salesman.

My do gooder viewing:
Fast Food Nation. A fictionalized rendition of the hard-hitting book. I read the book and was seriously moved. The film did it no justice.

My surprisingly good:
Little Miss Sunshine. Way better than I thought it would be…added touch of the family coming from New Mexico.

The nod to the legends:
Gotta watch a classic every now and again to see how it’s done. The Lion in Winter fit the bill. Great script, crappy editing, great cast. A VERY young Timothy Dalton is yummy! And Katharine Heburn, well into her sixties, still rocks the screen.

Coming through the speakers:

Been struggling with music lately. It’s my favorite distraction but I find I’m tending to listen to the stuff I already have, occasionally buying a single song or two from iTunes. Nothing is firing me up lately. I’m mostly back in the old stuff. On a Glen Campbell jag lately (would love to catch him live). Mostly my listening is limited to my Sirius radio. Channel 62, The Roadhouse, playing oldies country. (yes, I admit it).

So I’m open to suggestions here. I’ve grabbed a couple of the Song of the Day free downloads from Starbucks, but nothing yet has fired me up.

This sort of depresses me. For me, music is essential to my sanity. The search continues.

Just found the blog Confessions of a Pioneer Woman. Again, where the hell have I been? I’m only a couple days in but this is pretty entertaining…the ongoing tales of a city woman who married a country man and moved to the middle of nowhere. She’s smart, witty and surprisingly open. Fun. Her Ethel channeling Britney sound clip is worth the click. Found this blog from the comments section on a jezebel.com article about women prefering cowboys to city boys. I could weigh in on that topic another time….

And I’m stupidly addicted to I Can Haz Cheezburger?. I dream one day my cat will do something interesting enough so I can lol cat her heiny. For now, all she does is sit on my desk and look at me disapprovingly. 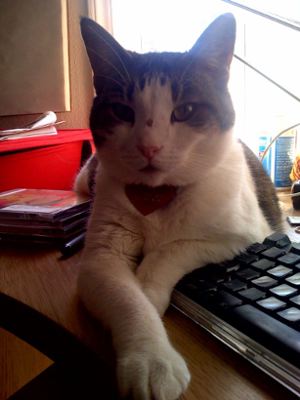