Old Technology Gets a New Boost

Old Technology Gets a New Boost

Somewhere back in the early 2000’s, right around the time that Apple came out with video chat, the use of desktop video conferencing took off. Or, I should say, tried to take off.

I was commanded by my leadership at the time to procure a camera (laptops didn’t come equipped with cameras like they do now) and to begin having meetings in video form.

It was a new toy and we all played with it and then, we got bored. Suddenly no one was logged in. Cameras were quietly disconnected and stowed in a drawer. And we went back to the usual phone call, chat or email way of communicating.

Fast forward to this week. My new leadership has commanded that I procure a camera (because our company security demands that the one on my laptop be disabled) and sign up for a brand spanking new desktop video conferencing service.

Per the long winded training I was required to complete, using this “new” technology will promote productivity (oh really? When we’re wasting precious minutes in meetings fiddling with cameras and asking “can you see me ok?”), enhances cost savings (because I just spent $100 of the company’s money to buy the “approved” camera) and reduces carbon emissions (except when I’m taking antibiotics).

The Good Man and I have been debating why video conferencing doesn’t catch on. While it’s nice to see the other person in a conversation, it’s not natural. Everyone just feels a little awkward.

Last evening, I was watching an edition of BBC World News and as they went to field reporters in many far flung countries, it became quite clear that they were using Skype or something similar to do these televised reports. No more camera and a camera operator.

As I watched these reporters, I began to realize why video conferencing is awkward. No one knows what to do with their eyes. Instead of face to face, eye to eye conversations, you get a lot of shifty eyes, and shifty eyes make for uncomfortable conversations.

The most natural fix for this is to look the camera square in the eye. 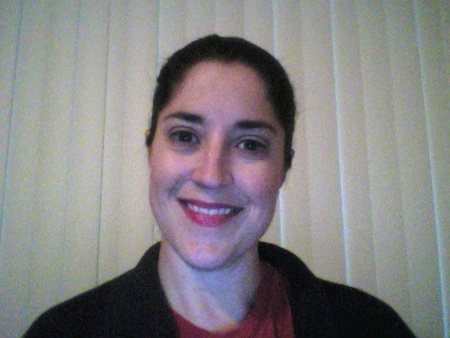 However, that’s natural for the people on the other end, for the speaker, it feels weird to speak to a lens. You are inclined to look at the screen to see the person you are talking to. That’s how humans communicate.

So you get this instead: 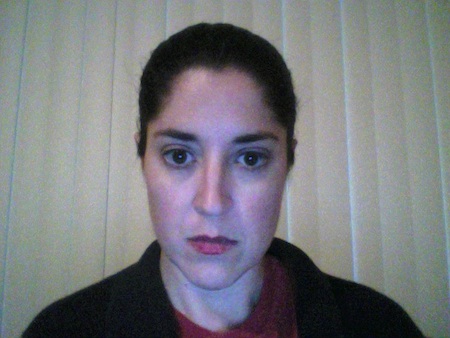 And then, of course, there are the multitaskers. Not only are they not looking in the eye of the camera, but they are also not looking at the screen where the other image is located. 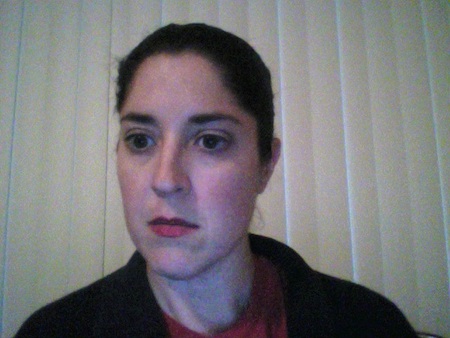 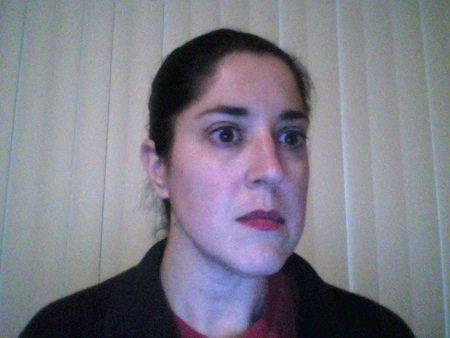 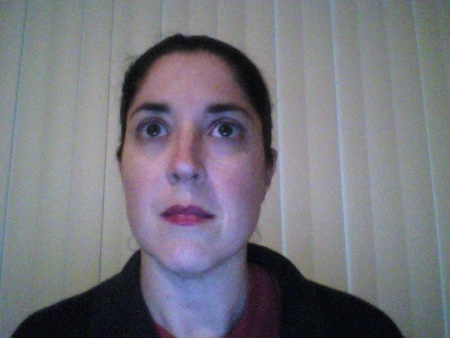 Well, whether I think this is a good idea or not, I’ve been commanded to video conference, both in my one to one sessions with my boss and in our staff meetings.

And so I will.

This, however, severely limits my ability to wake up fifteen minutes before my 8am staff meetings, shamble down the hall, fire up my home machine and take the meeting on the phone with frazzled hair, still in my nightgown, while eating breakfast.

(I’m reminded of an episode of the Jetsons where Judy had a videophone mask for those very bad hair days. I need that.) 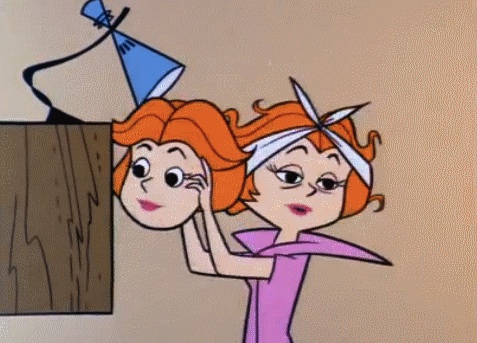