Independence Day, commonly known as the Fourth of July, is a federal holiday in the United States commemorating the adoption of the Declaration of Independence on July 4, 1776, declaring independence from the Kingdom of Great Britain. — Source

And so it is on this Fourth of July in the year 2012 that I find myself, an American citizen, residing in the land from which our forefathers sought their independence.

236 years ago a bunch of men and women fought to establish a new country, away from the oppression of an overbearing king.

A challenging fight for a worthy goal.

Their victory and the resulting independence is so enduring that two centuries later I can get on an airplane, fly for ten hours, and stand here, on the Thames river, and celebrate my freedom.

It’s both ironic and a little bit alienating.

The drafters of the Declaration could never have imagined.

I’d sing the Star Spangled Banner, but these sodding Brits might remind me that our country’s anthem is set to the tune of a British pub song.

I’d sing “My Country Tis of Thee” but that’s just “God Save the Queen” to this lot.

How about God Bless America? Nah, Kate Smith ruined that one for me.

I suppose what I’ll do to mark the day is simply get up from my bed, go to work (it’s not a holiday here) and do my best. I might even quaff a beer and wish I was at a bbq enjoying a sunny summer day rather than another depressing rainy English day.

And next week when I return home to the shores of California, I’ll carry a small smile.

Because I think to truly understand and appreciate my country, I have to leave it every once in a while.

Happy Independence Day, America! May you all eat too many hot dogs and have an extra bowl of homemade ice cream for me. 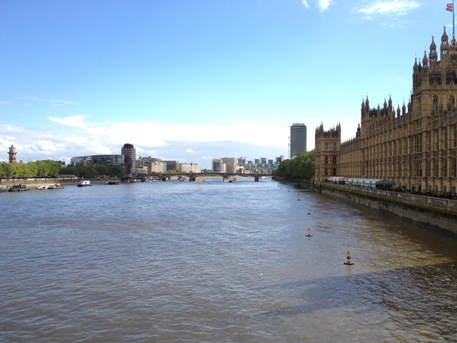 The river Thames as seen from the Westminster Bridge

Photo Copyright 2012, Karen Fayeth, and subject to the Creative Commons license in the right column of this page. Photo taken with an iPhone4s and the Camera+ app.