For the past three days, it has been me, a U-Haul box (size Medium) filled to bursting with papers, and a shredder.

Then the machine overheats and stops shredding. Then I go back into our under-house storage and pull out another box, bag or whatever and go through it until the shredder cools off.

Then I start shredding again.

Today, as I got down to the bottom third of the box of papers, I was sucked into a time warp. I was pulling out bills and correspondence dating back to 1999.

That’s 12 years ago. Twelve-year-old documents. Twelve years is both a very long time and yet a mere blip in the world.

It has been quite an archeological journey through the strata of one medium size U-Haul box.

Here’s a few things I’ve learned along the way:


1. For the most part, the stuff that I kept was the kind of stuff that shouldn’t have gone into the trash. For example: pay stubs with my social security number, account numbers and other identifying information listed. Papers with credit card numbers. Things like that.

Where I fell down was in not having a shredder. When I moved from the South Bay to this place, I burned out my old shredder and didn’t replace it. So I just kept all these papers in a box.

About 2007 or so The Good Man and I bought a shredder and so I’m doing a better job of keeping ahead of this stuff.


2. I’m not actually a hoarder. Last evening I was a bit worried. I journeyed deep into the bowels of Google to read up on it. A true hoarder will have stuff filling every corner, including their car.

I abhor having a car filled with crap. Also, I think it’s a travesty to have a garage and not be able to park in it.

So my hoarding side and my tidy side conflict. This tenuous balance is what keeps me on the “not so bad but could use some work” side of the hoarding line.


3. It feels really good to shred every remnant from a job I held for just a year and that treated me very shabbily.


4. Boxes of crap kept up off the ground don’t mold. Boxes sitting on the ground become a scary experiment in the rapid proliferation of mold.

This doesn’t happen in New Mexico.


5. I don’t bounce checks nearly as often as I used to.

I’m sure that’s partly because I don’t actually write checks anymore. But I also don’t overdraw my account like I used to. I shredded TONS of notes from the bank notifying me that I was overdrawn.

I haven’t seen one of those in a long time. Like years.

I think I used to play it pretty fast and loose with the float time on checks. Not so much these days.


6. I still keep a copy of all the important payments I make (like a copy of the check sent to the Superior Court to pay a red light camera ticket) but I don’t keep them in paper form anymore.

Ain’t no one gonna complain about a cluttered hard drive but me.


7. Getting out from under a pile of twelve year old crap feels really, really good.

So good I uncorked a nice bottle of red and am relaxing tonight feeling pretty happy about my progress.

So the shredding is done and the separating the wheat from the chaff, or the donate from the trash, continues tomorrow. 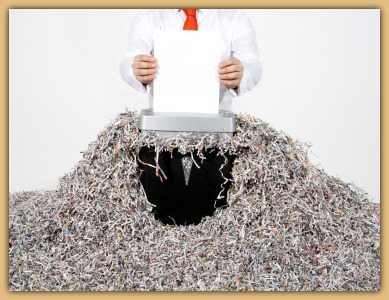 Image from The Lake Mary Blog.