While we haven’t quite yet passed to the end of 2011, I’m already in progress on what will surely be the biggest change to impact my new year.

You see, the Good Man and I are moving house.

It’s not a big move, just a few miles away. But we are moving to a much larger place with two, count them TWO full bathrooms.

I experience waves of joy at that thought.

As the landlord is completely renovating the place (we get to move in with all new paint and floors and appliances, yay!) we won’t actually move until later in January.

Here’s the thing. I have lived in our current spot for almost eight years. The Good Man moved in almost five years back. But for me, eight long years. That’s a lot of time to accumulate crap.

A lot of crap.

Over the years, I may have been accused by friends and family of having difficulty with throwing things away.

I’m not a hoarder. Much.

I mean my place isn’t floor to ceiling with newspapers I can bear to part with, but the extra large storage space under my current place IS full of all manner of stuff that should have been thrown away or donated long ago.

The Good Man is fairly organized and keeps his stuff pretty tidy. He goes through everything about once a year and culls out, cleans out and donates.

So laying ahead of me, I have a fabulous future with a shiny new home. It has a fireplace! And a deck. And an actual living room.

Surrounding me, I have boxes and bags and barrels of crap to sort through.

I pledged this week that I’m off work to clean out everything under the current house. So instead of enjoying my bright future, I am lost in my past.

Today I went through a huge box of papers, bills and receipts. This is my personal weak spot. For some reason I think I need to keep every receipt I ever get. The Good Man has me on a rehab plan so I don’t keep doing this.

I traded in that Jeep on a new one in 2001. So I kept an almost seventeen year old document on a Jeep I sold ten years ago from from a state where I no longer live.

I remember talking to my mom in the year after my dad had passed. She was going through everything they owned with plans to eventually sell their house and move somewhere more manageable.

In the stuff, she found a box of papers that my dad had kept. In this box were bills and receipts that dated back to the first year of their marriage. They were married for forty-five years.

Mom fired up a burn barrel and alternately cried and cursed while disposing of the stack of paper that had (unknown to her) been a part of her life for her entire marriage.

Today, as I shredded, I thought about that. I though about how mad The Good Man would be if I died and left him with all of this crap to sort through.

I have to strive to be better, to get rid of stuff more often, to keep my piles of crap under control.

My future is bright. But I gotta sort through my past first. 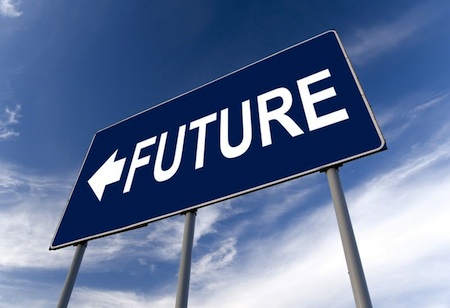 Image from The Magic Forest.

This is an early entry for this week’s Theme Thursday fun. This week’s theme = future.