What better way to celebrate the long drive home from L.A. than with my favorite story about the ubiquitous Grapvine. The Grapvine is what they call the bit of road leading through Tejon Pass in the Tehachapi Mountains in Southern California. After miles and miles of bleak, hazy and bland I-5, the Grapevine is sort of a welcome breakup to the drive.

It also, in my opinion, serves as the gateway to Southern California. Everything changes once you come off that mountain pass and drop down into the outskirts of L.A.

This bit of road is the stuff of legend and lore. Many a car has met its match on the Grapvine as the climb from sea level to at times as high as 4000 ft proves to be too much.

And with that, I’ll turn it over to a great New Mexican, the cowboy poet and dear friend of my best friend’s family, Baxter Black.

I read this story aloud to The Good Man as we made the summit….being on the very same road made it that much more hilarious.


The Grapevine
By Baxter Black


Equisearch columnist Baxter Black ponders the futility of tryin’ to impress the ladies while driving a Chevy Nova.

How better to impress his new lady friend, thought Rob, than to take her to his friend’s rancho for an afternoon branding and BBQ.

She would be pleased to see that he had many friends who drove pickups with chrome grill guards, tinted windows and coordinated paint jobs. He admitted to himself that his own outfit was less ostentatious. His ’64 model two horse trailer had been repaired so many times that it looked like a well drillin’ rig! The ’76 pickup was using 2 quarts of oil to tank of gas and his horse was . . . well, ol’ Yella looked right at home.

Rob was eager as a piddlin’ puppy when he picked up Delilah and headed north outta the Loa Angeles area. He was anxious to make a decent impression but one large obstacle lay in the pit of his stomach like a pea in the Princess’ mattress . . . THE GRAPEVINE! It was a monster of a hill dreaded by truckers and people who still drove a Chevy Nova.

The engine was screamin’ and smokin’ like a burnin’ pile of creosote posts when they finally leveled out at the summit of the Grapevine. Rob had sweated through his shirt but he sighted with relief as he gave Delilah a comforting look. She smiled back uneasily. Then the motor blew! A big dent appeared in the hood and it sounded like someone had dropped a Caterpillar track into the fan!

They coasted silently into a service station at the bottom of the grade. He assured his sweetheart there was “no problema”. He had lots of friends nearby. Her reaction was one of forced optimism.

By dark he’d borrowed a pickup from Hank and they both agreed returning back home was the best option. He loaded Yella, hooked up the trailer and back over the Grapevine they flew! Halfway down Rob managed to slip his arm behind Delilah’s neck.. Soon she was lulled into discussing’ her dreams of home and family. She snuggled closer as he watched a tire bounce by him on the driver’s side. No headlights shown in his rearview but he couldn’t help but notice the huge rooster tail of sparks spraying up from beneath his trailer! He could see her astonishment in the flickering light.

Rob wheeled the screeching rig to the shoulder. Together they unwired the trailer doors and Yella stepped out, unhurt. Rob tied him to the highway fence and unhooked the trailer. Rob’s facial tic had returned.

Seemingly in control, he jumped in the pickup and headed south for the nearest phone to borrow a trailer. He returned to the scene to find Yella grazing in the median with semi’s whizzing by on both sides and his date shivering over the still warm axle, forgotten. She, herself, was smoldering. She spoke not a word and Rob conceded to himself that it was gonna be hard to regain her confidence.

In the space of 12 hours and 50 miles he had left his pickup, his trailer, his horse and his girl scattered from one end of the Grapevine to the other.

Next day he towed the pickup to the shop. He left his trailer to be impounded by the State Police. His horse made it home safe but Delilah changed her phone number, wrote him out of her will and has not been heard of since!

For more from this cowboy poet, visit BaxterBlack.com. 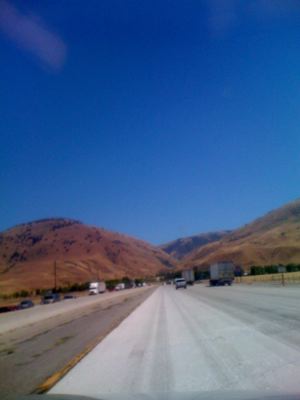