This morning I came wheeling into work with a Very Dark cloud over my head. My boss, who I rather admire, did an unmitigated jerky thing* yesterday (as bosses are wont to do), and after a mostly sleepless night last night, I was still fuming as I drove into work.

I wheeled my way into the parking garage and into my usual spot when I noticed what, on first glance, appeared to be a pile of trash.

Upon climbing down out my decade old hoopty, I looked again at the pile of trash and tilted my head like a curious dog.

There was something not so trashy about the trash. I was compelled to look again at the tableau, a still life in paper, cellophane and aluminum.

The light was perfect, the scene so serene.

So I had to take a photo. Several actually, as it was tough to capture just the right mood. 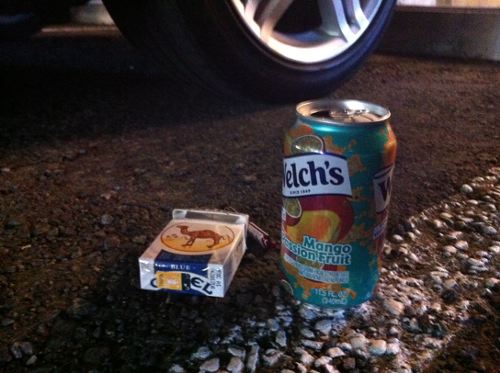 An empty pack of Camels, a Swisher Sweets wrapper and an empty can of Welch’s Mango Passion fruit juice.

There was something of a discord between this scene and the shiny new Acura parked in the next spot. I suspect this art installation didn’t come from the Acura but arrived somewhere in the small hours of the night.

In my ongoing self study of “where do ideas come from?” I found this particular bit of business to be a fine lesson. Ideas come from being awake to the world around. Ideas come from seeing things with a different eye. Ideas arrive when you look at a pile of discarded items and see something that you just *have* to look at a little harder.

When I saw this bit of trash:

The artist in me had to stop to take a second look.

The photographer in me had to take a photo.

The writer in me is still working out my version of the back story that created this shrine in a parking garage.

The ability to get fired up by the mundane…that’s where ideas come from.

*The jerky thing was not directed at me personally, but it impacts my team in a negative way, and that make Hulk Maaaaaad. Today he and I talked it out and have arrived at a workable solution, so all is well again in Working Land.

Photo taken by Karen Fayeth using the Camera+ app and subject to the Creative Commons License in the far right column of this page.