Coming Around To My Way of Thinking

It’s been said before that I’m a little “different” from your average employee. The streetcar of my brain runs a little off the beaten path. I use words and phrases in unusual ways. Occasionally only words in Spanish can convey my sense of the sentiment and my coworkers don’t always understand that.

With each job I’ve had in my life and each place I work, there always seems to be a breaking in period. A timeframe whereby things evolve from “what did she just say?” to “oh, that’s just Karen.”

I think today was turning point at my current place of employment. I just celebrated two years here and they are finally coming around to my unique way of looking at the world.

This group was a little more resistant than my last few employers, but I finally succeeded in breaking them down.

Here’s how I know. Below is a real and genuine account of events that happened just moments ago:

Scene: The office breakroom. Several of my rock star employees and I are gathered around the new vending machine. The selections are different from what the old machine offered and we are discussing the merits of each.

At the moment where we tune into the scene, my employees and I are quite racously discussing the positives and negatives of sour gummy worms. And we are laughing…a lot (we tend to do that on my team).

A one level up management-type person (not my direct boss, but a bossish kind of person) and a rather serious sort walks into the room. My employees all go still and their eyes drop.

She says, “What are you all doing in here?”

Without missing a heartbeat I match her serious tone and reply, “We’re negotiating with the vending machine.”

She pauses. Says, “Oh.” Then she spins around and walks out. I’m pretty sure she had a reason to come into the breakroom but I derailed her mental train. It was awesome.

Oh yeah, I’m going to be running this place soon. That kind of think of your feet, can-do attitude going to take me far.

Also, it’s important to know that the sour gummy worms were delicious. 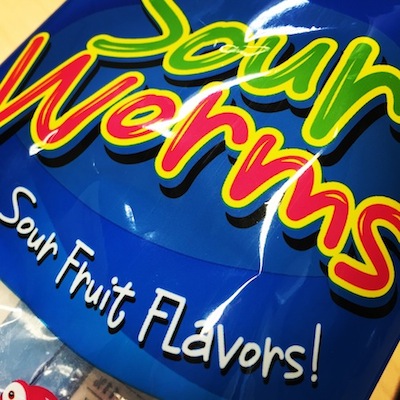 That there is my photo, Copyrighted by me in the year of 2015. © Karen Fayeth. Don’t steal, though I don’t know why you’d want to rip off a photo of an empty gummy worm bag. If you do want to appropriate my work, do pay attention to the Creative Commons license in the far right corner of this page. Taken with a iPhone6 and the Camera+ app.

This is a bear.

Oh yes. This bear is a survivor.

The bear was gifted to The Good Man. It is The Good Man’s bear, and so by the laws of respect and decency, I have neither opened nor nibbled on the bear. Sure, by the laws of the State of California that bear is half mine to do with as I please. But I am a nice spouse and I give The Good Man the space to open and nibble on his own present first.

But this bear. It challenges me. It torments me.

There it sits in its thin gold foil, smirking at me while I rummage and forage for holiday sugar snacks that aren’t there anymore. Oh sure, I came home from work loaded with sweet meats in the week before the actual day of Christmas. We had a dedicated shelf for all of the sugary holiday yum-yums.

But they are gone. Noshed. Dispatched with.

All except this freaking smiling bear. The bear that isn’t mine but make me want to p0wn it like the little chocolately bitch that it is.

I want to bash in its little head and gobble at its ears. I want to reach into its gullet and pull out the still beating chocolate heart and bite into it with fury and insanity and let the juices dribble down my chin.

I want to fry up its little chocolatey liver and sip from its corpuscles.

Oh yes, I want, need, must have it. It vexes me. It taxes me. I shall dominate this milky chocolate bear that hails from Switzerland and mocks me and doesn’t understand the needs of a sugar fiend.

And gobble the remains.

Do you think I probably need to back off the sugar a bit? Probably need to get a few more veg in the maw and less processed sugar snax? Maybe something protein based with a little less fat? Something with actual nutritional value?

Slightly askew photo of my chocolatey prey is Copyright 2013, Karen Fayeth, and subject to the Creative Commons license in the right column of this page. Taken with an iPhone5 and a dash of maniacal insanity.

And Then I Danced With The TSA

This weekend I arrived early at an airport to climb on my fourteenth airplane of the year so I could head home to the now all too familiar San Francisco International Airport.

In twelve of the first thirteen flights of this year, things have gone very smoothly. One was a bit rocky, but could have been much worse.

Then came flight number fourteen. I suppose it was just my turn.

I stepped up to the security line and pfft’ed at the amateurs around me. Before I even got to the steel table and the plastic bins, I had shoes off, laptop out and a determined look in my face.

As in, this is not my first rodeo.

I was directed to xray. With a sigh, I took my spot and waited. Then I was waved into the machine and I assumed the position. Feet spread, arms up over my head with elbows bent. Fingers spread.

Did I mention this is not my first rodeo?

I waited. And waited. And thought “damn, the backscatter at SFO is a quick one. This one is taking an eternity.”

Finally the TSA agent waved me out of the machine and pointed to a rug with the outline of two feet. That’s where you stand and wait for the agent to hear from The Someone in the backroom reviewing scans and reporting back.

Nothing. Seems her radio was busted. So she asked her counterpart. He called it in. Three people had already come through the backscatter and given the all clear. Seems that certain Someone didn’t have my scan.

The female TSA agent said, “ok, let’s send her back in” pointing to the backscatter machine and I nodded. I was ok with that.

The male TSA agent said, “No, she left the machine and she can’t go back in.”

“I’m sorry ma’am, we’re going to have to give you a pat down,” I was informed.

“You can put your arms down, I have to call for an assist.”

“Do you want a private room?”

“I will run my hands all the way up and down your legs, between and under your breasts, in the back of your shirt, in the waistband of your pants and in some sensitive areas. Do you understand?”

And so the blue uniformed woman got frightfully intimate with me right there in the security area, and I let her. I felt mildly dirty but to be honest, this was not my first pat down. Turns out when you wear a flowy skirt sometimes the backscatter can’t see you so well and they pat you down anyway. It’s why I wear pants to travel these days (even though skirts are way more comfy).

“There, that wasn’t so bad was it? Now I just need to test my gloves. Wait here please.”

I turned to see another TSA agent say to my new girlfriend, “You got an alarm.”

“It’s these gloves again, I swear this is crazy!” she replied.

Every item in my possession had to be wiped and scanned. Everything, including the Hello Kitty popsicle mold I’d bought there at the airport (a gift for a friend’s toddler).

None gave off an alarm, but I wasn’t finished yet.

I was then invited into the private room. Was this like the champagne room at a strip club? Only I’m the dancer? I hoped to make some killer tips off of this routine.

This time not one but two female TSA agents came along for the fun. I got to keep my clothes on, but they felt me up real, real good.

Let’s just say…they were quite vigorously able to confirm that I was in fact NOT the next underwear bomber.

After this mauling, I was set free to move about the airport.

I reported to my friends that I needed a Silkwood shower and maybe a Cinnabon to get through the trauma.

We opted instead for a TCBY non-fat yogurt cup. Amazing what sugar can do to make you feel better about this mean old world.

But I just can’t get past the fact that I had to be mauled, molested and detained because their radio malfunctioned and their backscatter machinery burped and their gloves are known to set off alarms and yet they keep using them.

I was just trying to get back home.

Before this crazy ol’ year is over, I have two more planes to ride. May those trips go as smoothly as twelve of my fourteen flights thus far.

Waltzing with the TSA sure was fun, but I think I’m over it. 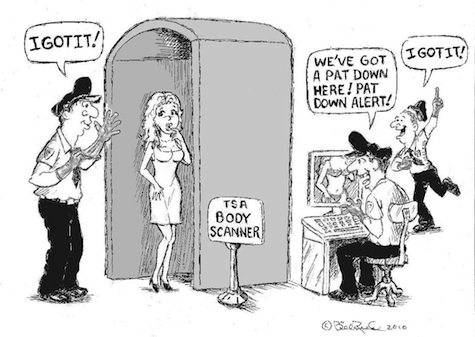