In honor of my beautiful, tolerant, and kind mother who was born on this very day, I present an entry that really, truly highlights just what a kind and tolerant woman she is.

And also the kind of crap my mom had to put up with in my formative years.

She deserves a better child than me, but I’m what she got. Hi Mom!

By the way, my dear mom has had to endure a lot this past week. Her oldest child (my brother) turned 50 and he also became a grandfather.

Hellova a birthday present to my dear Mom to suddenly become a great-grandparent.

And so Happy Birthday to my wonderful Mum! May it be filled with cake and fun!

And perhaps a Margarita or two.

My brother had himself a BB gun when he was a teenager, and when he went off to college, that BB gun was left at the Ute Lake house. For a while, around age 12 or so, I adopted that BB gun as my own. It had seen better days, but it worked fine and there was a big box of BBs available for my “ping!” pleasure.

I shot my mom. 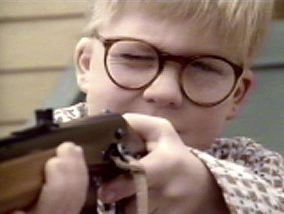