A Bobby Pin and a Bout of Curiosity

A Bobby Pin and a Bout of Curiosity

The Boss of my Boss, we’ll call him Big Boss, sits right next door to me at work. I get along great with him and respect him immensely. I’ve been at this gig for a year now, and as you spend time in close quarters with someone, you begin to take note of some things.

A few weeks back, someone stopped by my office, asking “hey, have you seen Big Boss this afternoon?”

I replied “Yeah, I saw him walk by about a half hour ago. He was carrying his briefcase, so I suspect he’s gone for the day.”

The guy said thanks and walked on.

But I paused for a bit, pondering the question: “Wait, who carries a briefcase these days?”

The answer is: Big Boss. He carries a briefcase.

Big Boss is a bit of an old fashioned guy. He’s very professional and I get the sense he would have fit in nicely in the 1980’s era IBM culture. Remember those days? Everyone in my business school talked in quiet and earnest tones about IBM’s required dress code. As quoted from Wikipedia: “A dark (or gray) suit, white shirt, and a ‘sincere’ tie.”

That would be Big Boss. Sincere. Ok, he doesn’t wear a suit every day, but he does often enough. Most days are dark slacks, and a crisp pressed white shirt. His clothes are nice but not fancy. His taste is conservative, but cost conscious.

He wears no sideburns, preferring to keep his hair nice and short, cut to the ears.

He drives a Volvo. It’s a top of the line model but with bare bones features. The base model of the best model. See? Cost conscious, yet nice.

He and his wife and two kids (a boy and a girl, naturally) live in a modest home in a decent neighborhood. It’s a really nice middle class place, but nothing too fancy.

He can make a PowerPoint presentation deck of slides like no body’s business. He can get his point across with an economy of words. He’s an excellent negotiator and never gets rattled. He always knows what he needs to achieve and then he achieves it.

He has the utmost and complete respect of his upper management. When I interviewed, the Vice President of the group told me she considers him to be indispensible. She could not go on enough about what a great leader and person he is.

His office is decorated mostly with awards and trophies from his upwardly mobile career. He has one bit of whimsy, a ballpark giveaway from when the Arizona Diamondbacks won the World Series in 2001. He’s from Arizona, Phoenix to be exact. Not Scottsdale. Not Tempe. Phoenix. Just plain Phoenix.

The guy is, by most accounts, unremarkable. And yet, he’s utterly remarkable as a manager of our team.

And he carries that damn briefcase. What’s in that briefcase!?!? It’s not his laptop, that would be too heavy. Plus, he has a separate roller bag for his laptop and computer gear.

It’s not files, we’re a “green” company and thus required to rarely print things out. If I need his approval, I’m to attach the document to an email and he’ll give me approval back electronically. So he’s not pouring over contract files or spreadsheets tucked into his briefcase.

He has been trying to diet lately and he brings in a few cans of Slimfast each day. Maybe those go in the solid old fashioned leather briefcase with the handle and the closer tabs that go “plick!” when you slide the button over.

Ok. So Slimfast. And what else? He keeps his mobile phone in a holster on his belt. His wallet in his back pocket. His files on his computer and his pens in his shirt pocket.

WHAT IS IN THAT BRIEFCASE?

I have to know. Now I’m obsessed about it. 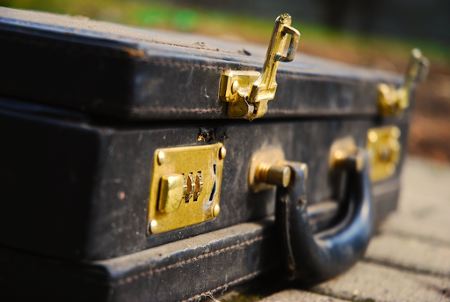