And I’m wearin’ it around my neck.

About a month or so ago, the internet burst forth with the story of mega-corporation Urban Outfitters (who I won’t link to) stealing Esty artist Stevie K‘s wonderfully successful “The World/United States of Love” line of jewelry.

The concept is simple yet beautiful silver pendants depicting states and countries with a tiny heart inside. Stevie makes the pendants out of precious metal clay and sells them through her tru.che Etsy store. This beautiful concept was successful enough, Stevie was able to quit her job and pursue art full time.

Since I’m no stranger to having my creative work ripped off on a much smaller scale, I was of course incensed by this blatant abuse of an artist making her way in the world with her creative work.

So I decided to support Stevie’s work the best way I could. I went to her online store and bought this: 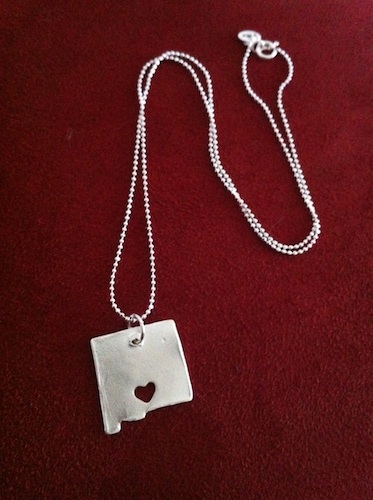 Lovely, isn’t it? In the posting for the New Mexico pendant, the heart was placed over toward the eastern side of the state, somewhere around Portales. Well, Portales is a fine town but it’s not where my heart is at. I asked Stevie if she could move the heart more toward the center of the state, and she obliged.

My heart is in Las Cruces where my real heart resides thanks to my two beautiful godkids. I will wear this necklace with pride both for where I come from and in support of independent artists everywhere.

I notice that Stevie has put her store on pause while she catches up on orders. Apparently I’m not the only one who wanted to support an independent artist who had her ideas ripped off.

But she’ll be back. If you want to show your love of where you’re from, keep an eye on Stevie’s store.