Suggestible Girl is Suggestible, and her German is Poor.

Suggestible Girl is Suggestible, and her German is Poor.

I am one of those uber suggestible people who will hear a word or a phrase used a few times then will immediately adopt it into my language. Especially if it’s a word or phrase I particularly like.

A a few weeks back, I heard the good man use a particular phrase, and it kind of rolled off of me. But then a few days later I heard it again on a rerun episode of Boston Legal.

Well, that was that. The phrase is now mine.

However….I’ve used it twice and only realized today I’ve been saying it wrong. I am now one of those pseudo intellectuals who try to talk big and end up sounding like a dope.

The correct phrase is: sturm und drang. Literally translated from German, it means “storm and stress.”

This phrase applies in oh-so-many ways to my current work environment. I have a new employee, I have three major global projects on the front burners, and just for fun, it looks like my team will be moving under the leadership of a different department all together. It’s all good change, but change nonetheless, and it is keeping us hopping.

So I’m at least using the phrase in the right context, but saying it wrong. All along I’ve been saying storm and drung.

No wonder I get so many blank stares. That and the fact I was suddenly speaking (incorrect) German.

Maybe I should just drop an Eastern New Mexico twang on top of it all and say storm and drain.

“Ya’ll, this storm and drain over the past weeks is just about wearing me flat. We need to set us up a little ol’ project plan before things get crazier than a March hare ’round here. Whaddaya say?”

I like it. I haven’t gotten real New Mexico on these folks in a while.

I have a meeting in forty five minutes. 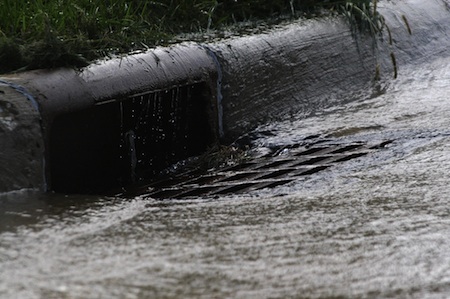 Photo from the City of Davis Public Works site.