Today I learned something. It may not be a groundbreaking discovery, but it’s an important handy tip to know.

Let me start with the backstory.

This morning I noticed I had a meeting on my calendar that started early and would last all day long, so I decided to hustle up and get it together so I could leave the house plenty early. I wanted to be able to stop for coffee and still get into the office a bit early so I could sit a minute at my desk, gather my thoughts, and prioritize any urgent emails before disappearing into a conference room for the remainder of the day.

What a good strategy! This is part of my new approach for taking better care of myself. Generally I show up to the early meetings five to ten minutes late, anxious and sweaty from running to the meeting. Oh, and lacking coffee.

With determination, I took care of my at-home stuff and hit the mark. I left the house on time and was happy. I had a casual and not harried drive to work and I even lucked out and found a parking spot right in front of my local Starbucks.

I mean, the day was ticking right along on schedule. I was feeling so proud of myself.

With Jeep parked, I walked inside hoping for a short line then opened the door to that very image. Only three people in line. Yesss!

I stepped up to the register, ordered my drink, chatted with the person behind me in line, giggled with their child and was feeling pretty great.

My latte came up quick and I grabbed it and was feeling pleased with the smooth pace of my day.

I carried my drink over to the little station where you can find sweetener and milk to add in. I politely said excuse me as I accidentally walked in front of another customer. I thought about an article I had read recently about the value of being nice, and thought how I need to continue to be a nice person even when the world sometimes makes me want to be mean.

Landing at the sweetener station, I popped the lid off my drink, reached to grab a couple packets of sweetener, shook, tore and when I went to put this into my drink, I knocked over my lidless cup, sending a coffee tsunami into the air.

The velocity was overwhelming as waves of coffee and soy milk engulfed the entire store and its patrons.

And that’s how I learned that Starbucks napkins are super, duper absorbent.

Keep that handy tip in mind. 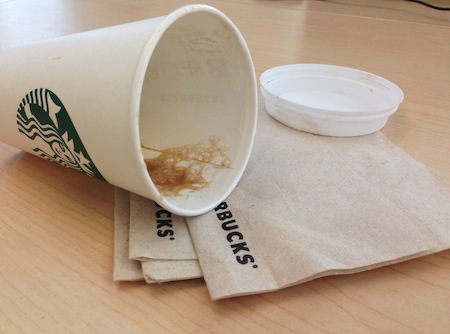 A dramatic, yet dry, recreation of events

Image Copyright © 2014, Karen Fayeth. Taken with an iPhone5 and the Camera+ app. Also taken surreptitiously in an empty conference room while the big meeting was on break.