"My life is like watching the Three Stooges in Spanish"

"My life is like watching the Three Stooges in Spanish"

Lot’s of running and jumping. Quite a few people getting smacked around. Zany faces. Screwball circumstances.

But without the volume, it’s hard to understand why all the commotion.

That’s me. Sometimes I don’t understand why all the commotion.

I think the answer is, simply, “that’s life.”

This week, I watched an episode of “No Reservations.” You know, the show with Anthony Bourdain? It was a rerun from last season, I think.

It was a “lost episode” from when they were filming in Beirut in 2006. There they were, clubbing, eating, sunning, and within the blink of an eye, things went bad. The country became unstable, they were surrounded by gunfire and air strikes. They had a terrible time getting out, eventually, they were rescued by US Marines.

Now that’s a hell of a commotion.

You know, I have it pretty good.

Sometimes The Three Stooges in Spanish is a lot of fun. Despite all the commotion.

(That’s me in the center) 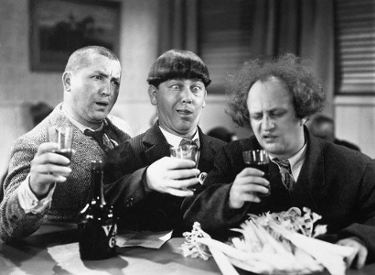