So, there I was today, in bumper to bumper traffic, trying to get to work.

The Bay Bridge is closed this weekend for construction, so the traffic patterns in the Bay Area have gone all wonky.

My usual peaceful, easy commute was jammed up. Fine. A fact of life in a highly populated area.

As you may or may not know, in California, it’s legal for motorcycle riders to “split the lanes”, meaning, they can ride in that space between two cars, side by side in their respective lanes.

It took me quite some time to get used to this, but now, especially in a traffic slowdown, I’m quite alert. As a car driver it’s always best to stay the course when a motorcycle comes whipping down between lanes.

This morning, as I sat, fully stopped, I watched the usual parade of motorcycles split the lanes. A Harley rumbled by. A really sweet BMW bike glided through. A couple of those very speedy Japanese bikes that force the rider to stick his rear up (doesn’t seem right to go a 100mph with your ass higher than you head, but what do I know?).

And then, in my rearview, I saw this patchwork bike come wobbling along, looking like something out of the Road Warrior films.

Apparently mismatched parts had been collected from the junk pile. The thin tires looked better suited to off road than asphalt. The fender didn’t match the bumper. It made a sound like a monkey wrench caught in the spin cycle.

But the rider sat tall in the saddle. He was decked in leathers and fully in command of his vehicle, proudly guiding his bike through Bay Area traffic.

And as he passed by, I noted the New Mexico license plate bolted firmly to the back.

As he rode away, out of sight, I held hand to my heart and quietly hummed “O Fair New Mexico”.

Thank you, New Mexico, for keeping it rasquache, even here in the Bay Area.

Oh so ready for the Labor Day Weekend. Happy and safe one, ya’ll! 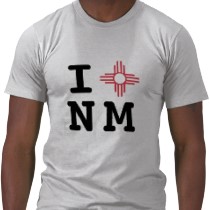