Misspelled, in Any Language

Misspelled, in Any Language

Ok, I gotta vent out a beef I have with the internet.

While it’s a wild and wonderful place, it’s also hell on the English language.

Ok, let me step back, I do enjoy a good LOL Speak as much as the next guy.

But that’s all in jest, right? I like to torture the English language once in a while myself. I love words and putting them together in different ways and seeing what happens.

I can make fun of the language because I respect it so much.

Now, someone might quibble with me that the word voilà is French and not English so what’s the big deal? Who cares if it gets misued?

Like avant-guarde, bon voyage, cul-de-sac, critique, and faux pas before it, the word voilà has been adopted into the English language.

And so when I see it spelled wah la, walla, wall ah, waalaa, whala and other variations, I end up grinding my back molars into dust.*

I don’t know why, of all the poor grammar and misspellings out there in the wild web, this one bothers me so much. But it does.

So for those who wish to use the word voilà but can’t seem to sort the spelling and that little accent thing over the a, might I suggest the following internet meme words for your use:

And many others. Or hell, make something up. I respect something made up so much more than a gross misspelling of an innocent word. 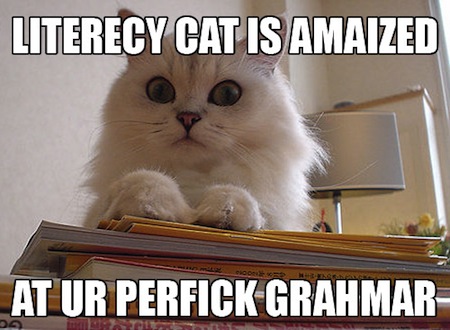