Yesterday I wrote about my mind bending, artifying, very inspiring trip to the museum. To prove I’m no snobby snobberson, let me tell you about the other thing I did this weekend.

To be precise, I took in an event featuring the B.ay A.rea D.erby Girls, a flat track league comprised of five teams.

On this night, the match was the San Francisco ShEvil Dead versus the Berkeley Resistance.

The event went down at the Herbst Pavilion at Fort Mason in San Francisco.

Of course I toted along my camera gear so I could catch all the action.

My exposure triangle collapsed under its own weight.

I don’t know much about derby, but what I know is this: there is one lady designated as the jammer. She is the only one who can put points on the board. Her goal is to lap the opposing team. Her teammates assist by keeping the opposing team from blocking her progress and they also help try to hold back the opposing jammer.

It’s a lot of knees and elbows and flying females.

In other words: AWESOME!

You know who the jammer is by the star on her helmet. 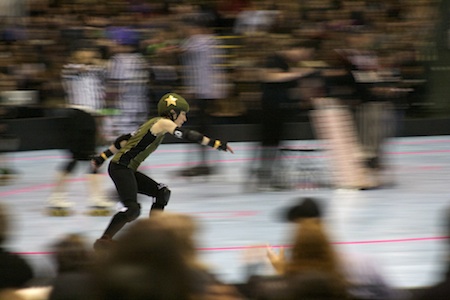 The jammer for San Francisco goes by the name Trixie Pixie. She must be about 90 pounds soaking wet. There would be a big clump of women duking it out, and then *boop* Trixie would pop out from the mass and go flying around the track.

By the end of the night she was my favorite player by far as the ShEvil Dead soundly beat the Resistance.

I came home with about 150 pretty useless photos. That blurry, noisy, streaky photo above is among the best of what I could get.

It may not look like much to you, but to me it’s a happy reminder of AWESOME!