Keeping it in the family

Keeping it in the family

Last night, The Good Man took me to see a play called “Perla” staged by Teatro Vision at the Mexican Heritage Plaza in San Jose.

The play was written by Leonard Madrid, a native New Mexican, and is set on the front porch of a home in Portales, NM. (funny, there in the theater, they didn’t capture that certain “wind off the feed lot” that I always associate with Portales.)

The story surrounds a pair of sisters who were raised by their very protective aunt after their father, a noted Norteño singer, ran off, and their mother died (both of sorrow and of cancer). The younger sister, Perla, goes on a quest in dreams and reality to find her lost father. However, finding him proves to be less fulfilling than she’d hoped.

Supporting a New Mexican playwright was my first objective. As an added bonus, I was pleasantly surprised by the beauty of the Mexican Heritage Plaza, and the efforts the cast went to in order to capture their characters.

One of the main cast members is married to a man from New Mexico, so she used her mom-in-law for guidance.

They also had a New Mexico woman as dramaturge. Yeah, ok, I had to look up that word. It’s the person who helps set the time and place for the cast so they can build their characters. So the New Mexican dramaturge had the job to help the cast and crew understand New Mexico.

Mostly, they did a pretty good job. There were a couple anachronisms, but in general, they caught the flavor and culture of my home state.

I *might* be a bit protective about my home…you know, just a little. So of course I had an eagle eye out on everything.

As we went on a preview night, the cast hadn’t fully relaxed into their lines, but it was a wonderful story and well told by the actors. It felt like the director may have over edited the script a bit, as there were leaps in time that didn’t flow smoothly, but mostly, it was a sad tale that ends with redemption.

My favorite part was a young girl who led Perla around in dreamscape, much like the Coyote Angel from The Milagro Beanfield War.

As there is the National Association of Latino Arts and Culture (NALAC) Conference happening this week in San Jose, there were a lot of people from all over visiting San Jose who also came to see the show. It was fun to hear the New Mexico people in the audience finding each other.

“I’m from Taos, and my friend is from Silver City,” I heard a few rows back. And I smiled. My people.

The only sad part of the night for me was when one of the employees of the theater told me that on opening night this weekend, they are making sopapillas.

I gasped when he said that! I am going to miss the sopapillas?!?!

Then he replied, “yeah, that seems to be the reaction of all the people from New Mexico. I had no idea that sopapillas were such a big deal.”

Oh silly non-New Mexican yet very kind man…sopapillas are like a religion, second only to the cult of green chile! 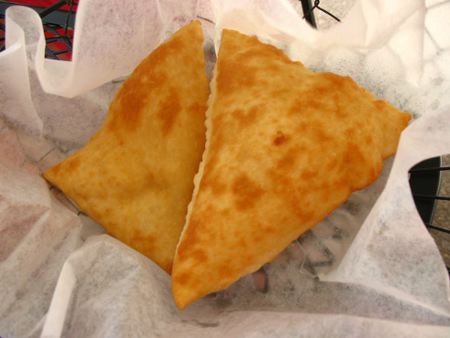