The poor, downtrodden, much ignored lunchmeat

The poor, downtrodden, much ignored lunchmeat

Poor lonely liverwurst sitting there in the corner of the deli case, wishing for somebody to love it with a slice of swiss and generous helping of mustard on a nice marble rye.

I think it’s that word “liver” in the name that puts people off, despite there being only being maybe 10%-20% of actual liver in the product.

I suppose if McDonalds served a McLiver and fries, it might be hip and people would eat it without thinking.

Liverwurst and its lonely brother braunschweiger get the fuzzy end of the lollipop.

I, myself, am a HUGE fan of braunschweiger (owing to the partial German heritage of both my parents), but when I eat it, my loving, studiously liver-avoiding husband refuses to give me a smooch for quite some time after consumption.

This is obviously a big point of consideration.

So if it comes down to smooches or sandwiches, I’ll take the smooches and leave the braunschweiger to the “only very rarely” category.

However…that being said, we have a well understood agreement that whenever we manage to find ourselves in a real deli (like Molinari or Carnegie) I will order a chicken liver salad, no questions asked.

These sorts of negotiations keep our marriage humming along, I think.

By the by, in case you are wondering why I am opining about liverwurst? It’s because it was the word of the day on my WordBook Dictionary iPhone app.

I had open that app today so I could look up a ten cent college-level word that my friend NewMexiKen threw out there on Twitter. It was a doozy!

And then I got lost in thoughts of lunch.

To you, that may look like a brown lump, but to me, that’s a lump of tasty goodness!! 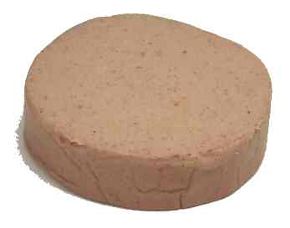