First, read this brief article from the ABQjournal:

“Someone stole a Santa Fe County Sheriff’s Department patrol car early Wednesday and apparently took it for a joy ride.

But the fun may not have stopped there for the bandit who took the patrol car from a county storage yard. Police are looking into the possibility the thief impersonated a sheriff’s deputy while using the stolen car to make traffic stops— while drunk.

The New Mexico State Police— which has taken over the investigation— is looking into a report the driver then used the car to make at least one traffic stop in Chimayó. A woman called State Police and told them that a man in a sheriff’s vehicle had stopped her and that he also seemed drunk.”

1) What size cajones does it take to steal a Sherffi’s car from the county lot? Or maybe not cajones, perhaps this is better measured in liters, or pints or….whatever measurement Mad Dog comes in.

2) Who hasn’t had, if even for a brief moment, the odd dream of making a stop in a patrol car. Blue and whites flashing. Sauntering up to the driver’s window, double knit beige polyester pants whiffing as you walk, mirrored aviator glasses in place. You utter something like, “Do you know how fast you were going?”

Someone was actually drunk enough to pull it off…and get away with it (so far).

3) How freaked out must the woman have been when she was stopped? WTF must THAT encounter have been like?

4) “(Santa Fe County sheriff’s Capt. Robert) Riggs said that in his 20 years as a cop, he hasn’t seen anything like this before.” You gotta work REAL hard to show a cop something he hasn’t seen before. Even in Santa Fe.

5) Is it wrong that I’m rooting, just a little, for the guy to not get caught? I know, I know, just because a crime is dadgum funny doesn’t make it any less a crime.

6) Once again, I’m ever so proud of where I come from. Go on Oh Fair New Mexico. Most other states take themselves WAY too seriously. We’ve still got the comedic edge. And that makes us special.

(Yes, yes, theft and drunken driving aren’t funny. But ya gotta admit, this guy had some flair.)

Just missing the ways of where I come from, for better and for worse.

Good news is I get to visit pretty soon. 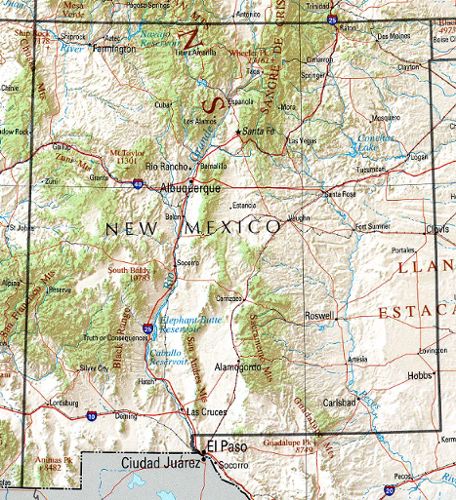