I may have only spent a week in Costa Rica but my coworker (who is a lifelong resident) has made me an honorary Tico. She is my favorite Central American employee and loves to share stories with me about what goes on in CR. What I mean is the kind of stories that make the locals shake their head and laugh, because what else can you do?

Today she shared a photo and a link to the Facebook page Sólo in Costa Rica. This is a page by Ticos and for Ticos. Photos are submitted from around the country. The page is all in Spanish and even if you don’t understand the language, you’ll get a laugh from the photos. (that said, some of the comments are priceless)

Here is but a small sampling:


This the photo that she sent to me this morning with the comment:

Look this picture, those cows are resting in the main door of a Bank in Alajuela downtown! Only in Costa Rica can happen those things.

I suggested maybe someone was making a deposit? *cue the laugh track* 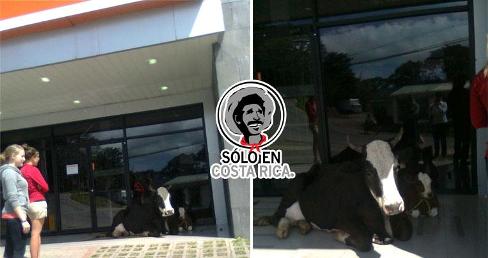 And then there is this one. The folks who posted it suggested maybe this is the CR way of recycling? 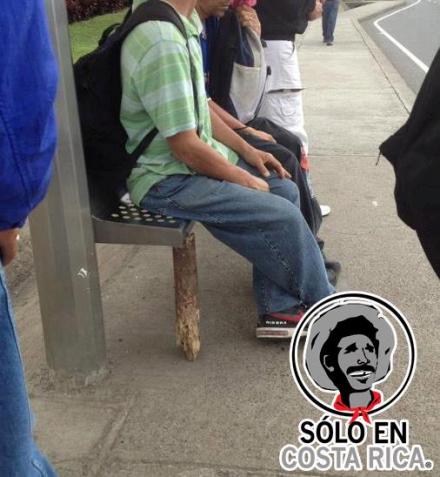 The comment here asks “What, is this for tying their horse?” 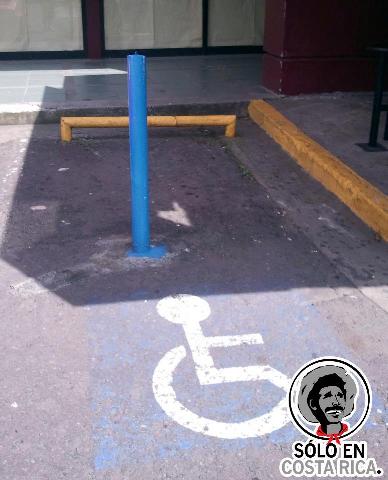 This one came with the caption “Gordo, where did you leave the eggs?” Yipes! 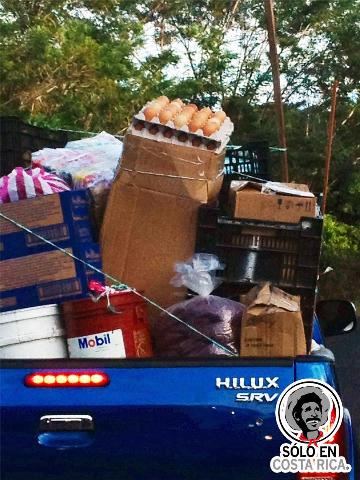 And finally, my favorite by far. It was suggested that this is the Costa Rican entry to the world of abstract art. It’s very Salvador Dali meets asphalt. 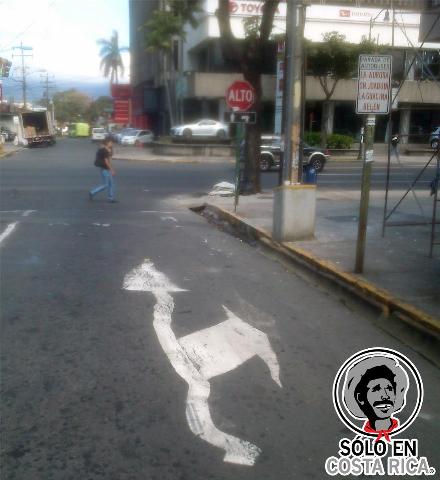 All of these and way, way more can be found on the Sólo in Costa Rica Facebook page.

She Did What?!? Ooooh Guuuuurl….

Here we are at Thursday again and that means it’s time for Theme Thursday fun.

This week’s theme is: Gossip

Or as a friend once said, “If you can’t say something nice, come sit by me.”

There are certain words that, for reasons I cannot explain, I just prefer to think of in Spanish. Chisme is just such a word. There is the relatively plain word “gossip” and then there is the inflection laden word “chisme.”

I would like to say I’m above all this chisme business. That I never sit in the passenger seat of a pickup with my best friend, Sonic sodas in hand, and cuss and discuss the world around us. I’d like to say I’m not like that, but I’d be lying.

I’m an eternal Nosy Nellie. I don’t like to get mean…I just like to know what’s going on. Call it insecurity. Call it envy. Call me irresponsible…just don’t call me late for dinner.

And let’s be honest, hasn’t Facebook just upped the ante on chisme? I mean, you can see what so-in-so is saying on their wall and then there’s the inevitable “did you SEE what she said?” or “did you SEE that picture?”

It used to be the biddies would pick up the party line and listen in on their neighbors (guilty as charged) but now it’s all out there on the interwebs.

I think it’s interesting, I looked up the etymology of the word gossip. Here’s what it said:

“The word is from Old English godsibb, from god and sibb, the term for godparents, i.e. a child’s godfather or godmother.”

Um, ok. I’m a godmother times three…so doesn’t that give me permission to cluck like a hen with all my girlfriends?

“The verb to gossip, meaning “to be a gossip”, first appears in Shakespeare.”

And I’m all literary and stuff, too!

Now…come on over….tell me, what’s the latest? You got any chisme for me? 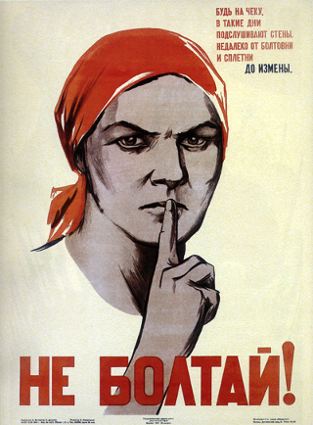 1941 Soviet era poster, used under Fair Use and found on Wikipedia

Off To A Slow Start

Here we are at Monday again and I’m making a rather slow moving entrée back into the world after a rock-star fun sort of weekend.

I imbibed just about one too many San Francisco Cable Car drinks at the Fairmont hotel and felt very retro with martini glass in hand. A Cable Car is the sort of beverage that tastes so good and then drops you on your arse.

Meaning, I loved every bit of that ride.

Since I’ve most certainly streamlined a few brain cells right on out of the ol’ noggin, I’ll use my friends at Unconscious Mutterings as a place to start this blogging week off right.

Without further ado, this week’s list of free association words:

That reminds me of that old joke blues musicians tell….

“What’s the range on a trumpet?”
“Oh, about two hundred yards.
“Two hundred yards? What are you talking about?!”
“You know, when I throw it over the piano, past the accordion, through the banjo…”

What I felt for the world after I’d drained my second Cable Car beverage.

It was nice to break up my dull work-a-day routine (that has me worn down to a nub) for a weekend of jolly debauchery.

It was much needed.

I may have infringed on The Good Man’s personal space when sleeping off both a wine tasting and a Fairmont cocktail party. I do tend to snore…and spread out, whilst in my cups.

Thankfully he was doing much the same. It was all good.

Ah misgivings. What I had the next morning upon remembering that my middle aged self can’t rebound like I used to. The sun screamed in the windows, the reflux shouted in my esophagus, and I found a bruise on my arm that I can’t recall how I obtained.

So I was a bit low the next day. At breakfast, with my hair falling down in my eyes, as Roger Miller would say, I was unsure I was gonna make it through the day. Two eggs over easy with sausage and a pot of coffee and suddenly the day started looking a lot better.

Then I took a nap.

And so, upon leaving the Fairmont, I had to establish just what a classy broad I am by setting my brand new glass “environmentally friendly” water bottle on the floor while I fiddled with my bag. I accidentally nudged the bottle, knocking it over. Once it hit the polished marble floor it shattered.

Not even going to touch this one with a ten foot pole.

And so after the most fun I’ve had in a good long while, this morning I had to conjure up the ability to go back to work. It was all gray cubicle walls and “did you get that cost savings report done yet?”

I sat at my nondescript desk with no Cable Car in hand and sighed the sigh of the responsible grownup I am for forty (plus) hours a week, planning my next adventure.

And thus ends the latest of my miscellaneous posts about miscellany.

(Isn’t that lovely? I yearn like a lovesick schoolgirl just looking at it.) 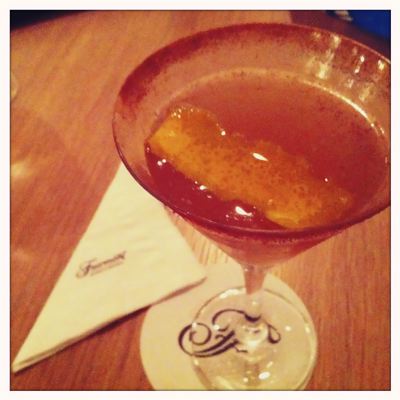 I wasn’t the only one having way too much fun at the Fairmont…this greeted me in the restroom off the lobby. Hell even I wasn’t having this much fun…. 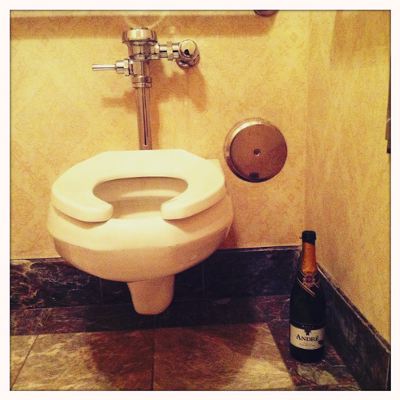 Photos by Karen Fayeth, taken with iPhone4 and the Hipstamatic app. 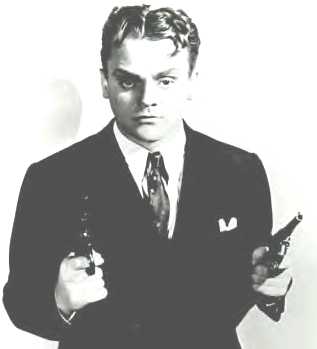 …use duct tape to keep the lift hatch closed on your beat up
Astrovan, THAT is rasquache.