From Nature Made to Man Made

From Nature Made to Man Made

Going to jump tracks a bit from yesterday’s purple mountains majesty to marvels of human engineering.

A couple days after my return from New Mexico, I had to drive up to Sacramento for work stuff.

On the journey over highway 80, there are two major bridges to cross, the Bay Bridge, and the Carquinez Bridge.

Both are, in my mind, very Jekyll and Hyde. Both beautiful and ugly at the same time.

When riding over these bridges, I always have to wonder what the bridge builders around here have got against the east side of a perfectly nice bridge?

Here, let me show you.

This is the eastbound section of the Carquinez, headed toward Sacramento: It’s got sort of an Erector Set toy feel about it, no? (assuming you are old enough to remember Erector Sets)

It’s very utilitarian and functional and not very aesthetically pleasing.

And then, for comparison, here’s the westbound section of the same bridge (headed toward San Francisco). 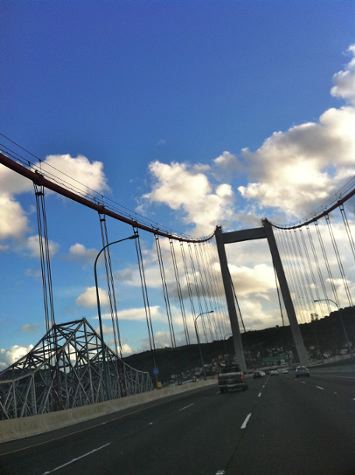 You can even see the less attractive side of the bridge off to the left.

I’d like to think that this two opposite halves approach is an anomaly to only the Carquinez, but no.

These photos are from the top deck, headed west, but look at the vast difference in the two halves of the bridge. 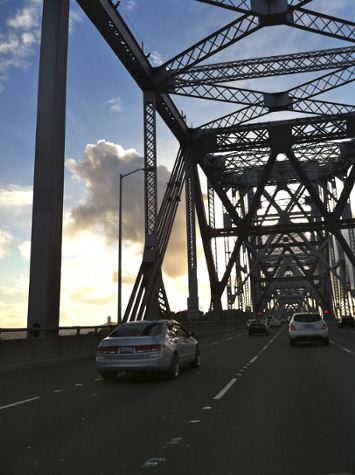 Again with the construction by Erector Set! So not pretty. Utilitarian.

And then the elegant, iconic western span: Rumor has it that they are doing new construction on the eastern span and when complete, it will be a much more attractive suspension bridge like the western span.

But given the pace of the Department of Transportation and CalTrans, I wonder if I’ll see it in my lifetime.

All photographs taken with an iPhone4 by Karen Fayeth and subject to the creative commons license as seen in the far right column of this page.