Today at lunch, I took a quiet, solo walk on the walking path near my office. Since my walking partner was too busy to come along and my iPod battery was tapped out, it was just me alone with my thoughts.

Being without distraction makes me more observant of everything going on around me. For example, the blue nosed ducks that have arrived as the weather turns colder. The squabbling Canada geese. The flatfish skimming the bottom of shallow waters in the lagoon.

And the humans. Oh those wacky humans.

As I rounded one corner of the path, I saw two guys in business suits taking photos of each other. They were standing by our iconic tall building with the company logo on top. This is a not unusual sight, really. In fact, I think for some of my coworkers in Asia, having a photo from headquarters posted on their internal directory page is a badge of honor.

Since so many people have that photo on their page, everyone is trying to get the different, quirky and odd take on the same photo so they can stand out a little.

This came to mind as I noticed one of the guys posed awkwardly with his finger pointing up. The other was splayed out on the ground, almost in the water, camera pointing up, coaching his subject “a little to the right…a little up…a little more…”

I know what they were doing. They were trying to replicate that cheesey internet meme where through the magic of perspective and photography it looks like someone is holding up a bridge or touching a seventh wonder of the world. 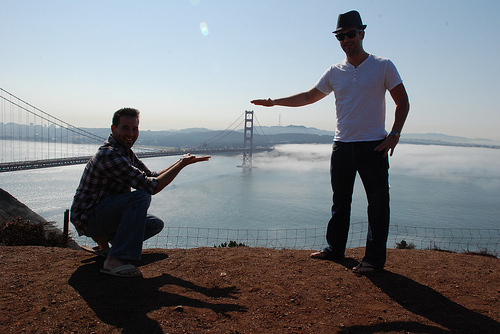 Only with an office building. I have to admit, they weren’t being shy about this at all. They were really going for it. I kind of felt bad for the guy laying on the ground wearing a full dark suit. That’s going to be a weird one to explain when he gets back to the training room. (there’s a sales training going on this week and there are a TON of dark suits wandering around)

I’ll bet the photo will look cool. But the set up looked goofy as hell.

Something akin to this: 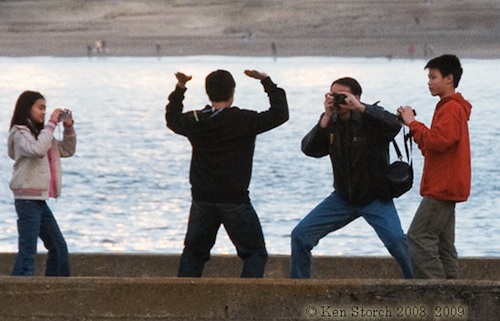