Facing A Fear…Or, Scratch That One Off The List

Most everyone has heard tell of this fruit they have in Southeast Asia that is really stinky. Most people will give you some sort of description of what they think it smells like including rotting flesh, pee and other unpleasant adjectives.

And of course all of these people who think they know a little something, when pressed, will admit they haven’t ever actually tried the thing.

So on a sultry Tuesday night in Singapore while drinking too much in a brew pub in the Boat Quay district, I was chatting with a coworker and native Singaporean.

He was asking me what were the things I wanted to see and try while I was in town.

I grinned. “Yeah…are you talking about….?”

Plans were made to get this American girl a taste of the stinky one, the King of Fruits, the Durian.

Thursday was the scheduled rendezvous and a group of us loaded up and headed for the Geylang District of Singapore, also sometimes called the Red Light District.

Despite being heavy on the laws and penalties, Singapore does actually allow prostitution. It’s just one of the many dichotomies of that fabulous city that intrigue me.

After a real hard work week, some coworkers and The Good Man and I found ourselves wandering what I could only describe as the old town of Singapore. The ungentrified part of a very gentrified city. I said to The Good Man “I’ve been looking for the soul of Singapore and I think I just found it.”

For among the clean streets and new glass and metal high rise buildings and a western sensibility in an Asian community, the Geylang showed me something different. A little more dirty. A little more dangerous. A lot more fascinating.

Dinner was an outside affair in a honest to goodness alleyway. The waitress told the ladies to watch their purses and anticipation for the meal ran high.

In addition to Durian, my Singaporean friend wanted me to try bullfrog porridge. I said ok.

We started with some Carlsberg beer to up the courage and soon the plates began flowing out of the open air kitchen.

We started with an oyster omelette (which The Good Man pointed out was like a Hangtown Fry without the bacon) and some beautiful sliced venison cooked in soy sauce and green onions. 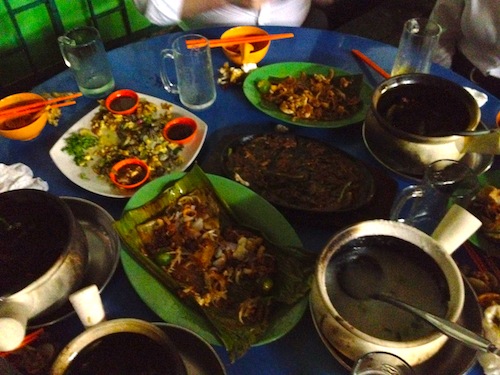 I had to take a photo just so I could remember

While the chopsticks got to working and we discussed just where in the densely populated Singapore would actual wild deer be found, the main event landed on our table.

In two pots, one containing rice congee and the other chopped up chunks of bullfrog. I took some of the spicy variety and dug in.

Very tasty. Tender and quite mild like a very fresh scallop. No, it didn’t taste like chicken and by the way this is not the first time I’ve eaten frog. The congee gave a nice backer to the spicy frog meat.

As we ate, even more food came out including grilled calamari, stingray (the second time I had this), prawns and a heaping plate of clams.

It was a feast and the company was great, the surroundings gritty (but good) and the weather was about as steamy as you can imagine.

In short, one of the most perfect meals ever in my little life and a memory that will linger with me for years.

After we stuffed ourselves silly then cleaned up with the aid of several tissue packs, it was time to take a walk.

Dessert lay ahead and we were ready.

Across a very busy road and in an open air stand backed only with hanging tarps, we found our destination. 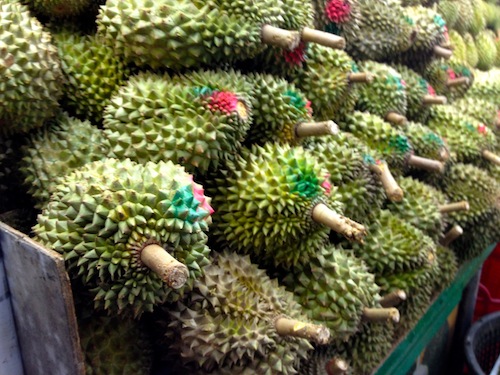 I don’t know what the spray painted colors mean

My Singaporean friend went over to the vendor, a guy with a short, sturdy knife in hand, and began speaking in local dialect. He told us later he assured the guy that he wouldn’t pay for the fruit if it was bad, he needed to see inside, they haggled over price, and so on.

A fruit was chosen, the guy hacked it with precision and it was presented to the rest of us who were seated at another plastic table in a Geylang alleyway. 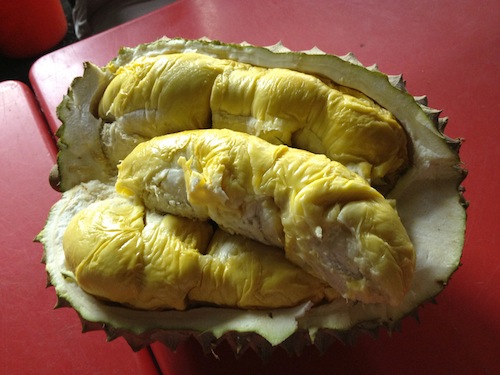 Each of those long strips has three sections to it

First impressions: It doesn’t smell that bad. It probably helped that we were outside and I understand some varieties of Durian smell more than others.

For me, it wasn’t the smell I struggled with, it was the texture. The fruit itself is like a custard inside a thin skin. You grab a section of the fruit (it pulls apart easily as there is a large pit inside each section) and just bite in. First bite my mouth registered “this is not a fruit” because it tasted kind of, well, savory.

But as I chewed and swallowed, on the back of my tongue, I tasted sweetness. The second bite I tried tasted sweet. Not big time sweet, just a nice mellow custardy sweet.

The more I ate, the more I liked it. I found after two sections, I was done. It was strangely satisfying and quite good.

Someone at our table popped up and went over to the vendors and negotiated for a plastic bag full of another fruit, this time the Queen of Fruits, Mangosteen. Less stinky and easier to open, the fruit inside looked like garlic cloves but tasted tangy and sweet. It was an interesting counter balance to the Durian. I understand they are often served together.

After a few sections of Mangosteen and another bit of Durian I was done. Topped up. Full to the gills and supremely satisfied.

By experiencing truly local food with the guidance of a resident “fixer”, I found the soul of Singapore.

It sang to the soul of me.

We are forever friends.

All photos Copyright 2012, Karen Fayeth, and subject to the Creative Commons license in the right hand column of this page. Taken with an iPhone4s and the Camera+ app.