All The Many Ways I Told You So

All The Many Ways I Told You So

I say this to the squirrel huggers and they tell me that I’m being silly. I say plague and they scoff.

So here’s how we are going to play this today. I am going to repost something I wrote in 2007. And then at the end I’ll give you an update to show you just how exactly 100% right I am.

Then I will do a superior dance. You’ll have to just visualize that one but know I’m dancing hard like I’m counting coup.

I am a woman of the west. The real west. The range land, unpopulated and dirt covered west. I know things. Behold.

They run around everywhere, up and down power lines, around trees, hither and yon. When I go for a walk at noontime from work, I walk down this one street and they scatter in all directions like a squirrely sea of doom.

People here think they are cute. Find them amusing. The fluffy tails make them laugh. People here FEED THEM. Yes, they put out food for the little b*stards.

They don’t understand my revulsion, my utter HORROR that these vermin are allowed to roam free in a civilized society.

They don’t understand this because I am a New Mexican. One of the bonus features of being raised in New Mexico is, da da dummmmmm, bubonic plague.

In fact, according to an article in today’s ABQjournal, there have already been four cases this year, including a boy who died.

To quote the article, “Plague, a bacterial disease, is generally transmitted to humans through the bites of infected fleas but can also be transmitted by direct contact with infected animals, such as rodents, wildlife and pets.”

Unh huh, no wonder every little rat with a fluffy tail gets the suspicious eye from me. Early on in life my mom would yell at all us kids to stay back from any wild creature, especially the small rodenty kind.

I will not draw one of those beady-eyed plague-carrying varmints closer to me or my home! I live in a duplex and for a while my next door neighbor put out bird seed with no cover or protection from the squirrels. I would stare horrified out my living room window to see a swarm of the things eating with reckless abandon in my back yard.

In my old place, a couple of squirrely warriors had an epic territory battle on the roof right over my apartment. Not only did I have to hear the squeals and the death call of the loser, I *freaked out* about the dead rodent right there over my doorway. As you know, fleas leave the dead rodent searching for a new home.

I shall print out the referenced article and keep copies handy for the next person who looks me and says “how can you not like squirrels, they are sooooo *cute*!!”

I’m keeping an eye on you, you plaugey b*stards!!!!


And now, the update and my vindication:

A plague-infected squirrel has closed a California campground for at least a week, according to Los Angeles County health officials.

The squirrel, trapped July 16 in the Table Mountain Campgrounds of Angeles National Forest, tested positive for the infection Tuesday, prompting a health advisory and the closing of the campground while investigators tested other squirrels and dusted the area for plague-infected fleas. 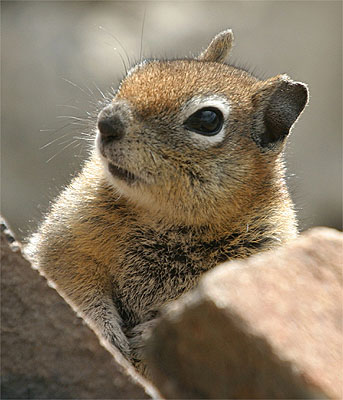