Oh fine. I did it. I watched the Super Bowl.

I’m not really a football fan. Baseball is where my heart is at.

But hey, there we were at football’s big show, the best of the season, right? So why not watch.

I’d only intended to watch the commercials, and to be honest, it started out that way. I was working in the back room, ignoring the game. I’d listen for the break and trot out there to see what was doing with the commercials.

Damn it all if those Saints didn’t pull me into the game. I started watching a few minutes here and there. But then Peyton and the Colts would dominate again, and I would wander to the back room.

Then there was halftime. That Who abomination. Ugh. I watched all of that. I mean, the Twitterverse was lit up with comments about the quite elderly rockers, so I paid attention. Time I won’t ever get back in my life…

Disgusted, I gave up once more and went back to my little office and back to writing.

Much better back there.

But then there was that onside kick after halftime. That did it.

That, and The Good Man suggested we get some Amici’s delivered. Pizza does always make me docile and want to sit low on the couch. So I gave in.

Belly full of pizza and disinclined to move around much, I watched both game and commercials for the entire second half.

Then there was the interception heard ’round the world. I’ll be damned. This was actually a really good Super Bowl. Well ok!

In the final analysis, I suppose it was worth my time to give XLIV my attention.

However, the game was way, way better than the commercials this year.

Check out hulu.com if you missed ’em. (Trust me, you didn’t miss anything.)

My brief commercial round up…

1. Too slappy (What is this NCIS show and *why* do they hit each other so much?)

2. Weird and unflattering use of little people (And isn’t Kiss even more aged than The Who?)

3. Too many tighty whities. Really, boys, if you aren’t going to wear pants, have the good grace to wear boxer briefs. I’m asking nicely.

Or is the emasculation of men the new “in” thing?

And so there you have it. My Sunday in a nutshell.

Onward to Monday, a day that began with stumbling out of bed and stepping into a puddle of a cat barf. Yay.

But thankfully, no tighty whities in sight. 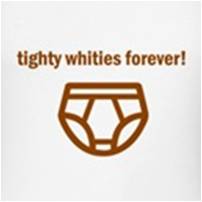