I am a woman of the West.

I know how to ride a horse. I know how to dehorn a calf and sear the artery if clipped. I have wrangled horses, cattle and even one summer, I wrangled honey bees for a ranch with a lucrative side deal for a major honey producer.

I have stood confidently in front of a pack of horses as they charged at me. I had a riding instructor who made us stand at various places in a large pen and she charged the horses at us and made us learn to turn the herd. Over and over.

I have stared down the barrel of a herd of calves who were naturally unwilling to herd and likely to scamper as they broke free from a trailer and ran to the four winds. I have pushed noses, tails and avoided flying hooves as I helped turn them back around.

I have even been in the line of fire of a charging herd of insane sheep (all sheep are insane) and got the hell out of the way.

Once, I was almost trampled by turkeys.

All of this is to say, I’ve got a little experience with large animals and herd behavior. I know how to stand confidently and turn those charging animals in another direction. I know not to have fear but only conviction.

I am a powerful woman of the West.

Today, I was out walking with a friend (known on this blog as Worm Girl) on a walking path that is next to a grassy berm that runs along a busy street.

Along this berm were about thirty wild Canada geese.

Suddenly along came a fire truck with sirens at full blast.

And when those thirty geese turned in masse and began running toward me (and away from the siren)…
.
.
.
…I screamed like a little girl, threw my arms over my head and hid behind my friend.

That’s me, a powerful, animal wrangling, rootin’ tootin’ woman of the West. 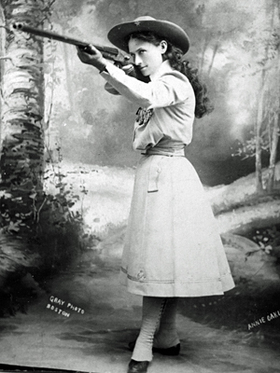 Annie Oakley photo found all over the web in public domain and used here under Fair Use.