When you point a finger…

When you point a finger…

How does that old saying go? When you point a finger at someone, there are three pointing back at you?

Was pulling the virtual slot machine lever on a blog idea generator, and the topic came up, “Write a letter to someone you need to forgive.”

So I thought to myself, “Who do I have to forgive?” and an image came immediately to mind.

You see, there seems to be something I can’t get over. It’s childish and stupid, but for some reason I’m hanging on to this.

In considering how I’d write a letter to forgive, I realized…it’s not the other person I need to forgive. It’s me. I have to forgive myself for being such an assh*le sometimes.

It’s Saturday night, at the Gipsy Kings concert, sitting in the second row with my husband, excited for the show to start.

As showtime is close, in walks a gorgeous woman with dark hair, red lips, long toned legs clad in tiny white shorts, her top half in a tiny halter-top. She’s also wearing a radiant smile.

She’s beautiful. And she sits right in front of us.

The show starts and she and the guy she is with are drinking, they are laughing, they are having fun. She gets up to dance and catches the eye of the entire audience, the band, the roadies, the ushers, everyone.

She’s beautiful and she has rhythm and she lacks self-consciousness and she dances well. We can’t help but watch her.

I want to stop envying her, but I can’t. And all those ugly things that women think about each other I’m thinking in my mind.

As the show goes on, I stop looking at the woman and I get into the show. As I described yesterday, it was an amazing musical experience.

Toward the end of the show, I start to notice the lady in front of me again.

Everything she’s been drinking all night has started to catch up to her. She’s got her eyes laser set on one member of the band and she’s doing all she can to get and keep his attention.

She’s trying to dance just for him, but she’s so drunk, she’s wobbling on her high heels.

She shakes her medically enhanced boobs for the singer, and one pops out of her halter-top. Her boyfriend stuffs it back in and speaks sharply into her ear. He’s not happy.

She’s so drunk, she doesn’t care.

She keeps trying to dance in a sexy way for the guy in the band, but now it’s become sad. She’s stumbling around and sloppy drunk.

And I feel a little haughty. A little Dana Carvey as Church Lady high and mighty.

When the show ends and the band members are taking bows, she rushes up to the stage and summons the man she’s been vigorously trying to get the attention of all night, much to the dismay of her boyfriend.

He comes over to shake her hand and she tugs at him hard, almost pulling him off the stage. When he’s in range, she plants a sloppy kiss on his lips. The band man isn’t happy. The boyfriend isn’t happy. The lady throws her hands up in the air like a referee signaling a touchdown.

Now I’m embarrassed for her. In that haughty way I have.

The lady’s boyfriend says some words to her, trying to keep his cool. She’s so drunk, nothing is sinking in, so he grabs her hand and drags her away. He has to help her up the stairs out of the venue.

As we leave, we see them sitting on a low wall talking. Well, he’s talking. She’s trying not to pass out.

The Good Man and I go out to our car and we sit there waiting for the parking lot to empty out a bit. When we find a gap in the flow of cars, The Good Man turns on the car and hits the headlights. In the spotlight, we see the couple again. She’s now slipped-over-the-line drunk, unable to walk. Her high heels are off and she can hardly stand.

The suffering boyfriend now picks her up like a sack of flour, under his arm, and carries her drunk dead weight to their car.

I feel sorry for the man. And the lady.

And I feel smug.

As we drive home, for some reason all I can talk about is the lady and her boyfriend, and I don’t know why.

Why does this bother me? Why can’t I stop obsessing??

And so here’s the forgiveness part:

On the night of July 10, you, as they say in the vernacular, showed your ass.

It just means we’re all human.

How about just being ok being you?

Betcha it might make your days go a whole lot easier. 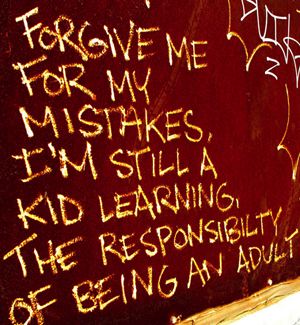