Lately I’ve been on quite a jag of reading the works of one noble New Mexico left handed cowboy poet named Baxter Black. He’s a good friend of my “adopted dad” (my best friend’s father). I had the chance to meet him once back in college and I’ve heard stories of his over the years.

I was heartened to see that my local library carried a good selection of Bax’s works. They make you smile, make you think and make you outright laugh yer bum off.

I just got done reading one of his collections from a few years back. It was one of the books of his NPR material called “Horseshoes, Cowsocks and Duckfeet”. One selection from that book is called “Lake Valley”.

Man oh man. That almost made me weep with homesickness. It also made me smile to know that two people, some twenty-five years apart in age, have similar memories of the same event. That’s the staying power of Lake Valley.

In fact, back in college I used to go to Lake Valley with my best friend. She’s the one who turned me on to it. Her parents used to come along with us too, having danced at Lake Valley back in the day (and probably along with Bax). I remember at the dance they used to give you a family rate of $20. My fill-in dad would gather up all us scraggly college kids, blonds, redheads, brunettes, short, tall, thin, stocky and all about the same age. He’d point to our gang, tell ’em that was his family, throw ’em a twenty at the door and we’d all get in.

You know, in our way, we were (and are) family.

The way Bax describes Lake Valley in his writing is just how I remember it. Though when I was going, a band called The Rounders were the ones playing the old songs. What a talented group, The Rounders…they even played at my best friend’s wedding. Now THAT was a party.

At the end of this post is a photo I found online. It’s how the schoolhouse used to look. Ok, imagine that…but with no desks and a lot more years on it and that’s pretty much how it used to look. See that riser there at the end? Where the teacher would sit? That’s where the band would play. It was a long narrow room and we had to dance in a long oval. Like Bax said, the floorboards give under your feet and after all the years they weren’t particularly even, so you had to mind your feet, but oh was it a hell of a good time.

I’ve never felt quite so free, happy and in touch with the simple easy joys in life. I miss the feeling of flying I’d get dancing a polka with my very tall and very dear friend Larry. I loved the camaraderie of wrapping arm around arm and doing the Schottische and Cotton Eyed Joe (“stepped in what?”). And, as Bax said, when the band took a break, we’d all migrate outside to cool off and dip into the ice chest for food, beverages and the telling of a few good stories.

Ah the memories. If I let ’em, they’ll take over my whole day. 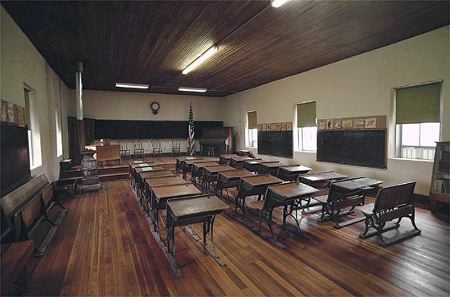