All the talk lately about Governor Richardson running for president has had me thinking about the men who have occupied the governor’s seat in New Mexico. It’s funny, I lived there from the early 70’s through the 90’s and off the top of my head I can only remember two (though there were more).

Toney Anaya. He served from 1983 to 1987. That was when I was in high school. My mom used to call him Toney Annoy-ya. He was this little nebbish of a man. To be honest, the only thing I remember about him is that in the waning days of his leadership, he commuted every death sentence in the state to life in prison. Oh man, were there some hostile folks about that. New Mexico is traditionally a very Democratic state. But there is a good portion of New Mexico (farmers and ranchers, mostly) that are as conservative as heck. My dad was an engineer and as is traditional for the engineering folk, also incredibly conservative. He leaned so far to the right I’m surprised he didn’t flop over when he walked. Thankfully one of his offspring (me) has turned out quite moderate. I can even walk in a straight line. I remember when this whole thing went down with Anaya he would fume and talk back to the television when the news was reporting about the details. At the time I remember thinking it was a pretty compassionate thing to do, but wondered how we’d pay for it all. Governor Anaya certainly left an impression on the state. On me too, it seems.

The other one I remember is Bruce King. He served from 1971 to 1975 and again from 1979 to 1983 and then again from 1991 to 1995. No wonder I remember him so well, he was governor for most of life. The memory I’m here to talk about today had to be from his first incarnation as governor. My memory is pretty fuzzy about my childhood, and so dates are tough, but there are certain memories that are vivid in the visuals. This is one.

I was in grade school, had to be maybe first or second grade. We went on a field trip to the capitol building in Santa Fe (“The Roundhouse”) and had a tour. I remember the state legislature was in session. We all had to go in and sit quietly and listened for a while. I can only say this from my memory…boooooring.

The tour continued and we went on to the office of the governor. I remember standing around when the teacher and other adults suddenly got twitterpated. Without warning the largest, loudest man I’d ever seen in my life in the biggest brownest polyester suit emerged from some hidden doorway and came out to greet the children. Many of the kids ran to him and hugged his leg. I had zero idea who the hell that was (I was always a head in the clouds kind of child) and I sure as hell wasn’t going to hug a man that scared me senseless.

He came around to us, one by one, patting heads (in hindsight, kind of like a priest). I remember when he patted my own head he stank of cigar smoke. He scared me even further up close. I have sensitive ears and that guy was *loud*.

I’ve included a photo I found on the web at the end of this post. I have no idea of the date of that photo but I can say he makes Bill Clinton look small in that photo, and Clinton is no tiny man.

I think that brief meeting of a “man of power” at a young age sort of tinged my view of all governors…and maybe presidents too. I expect them to be all verbose, bluster and polyester. I may not be too far off the mark.

Anyone had the chance to meet Bill Richardson? What’s he all about? Shoot me a comment or an email, I’d love to know. 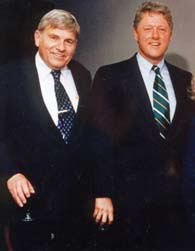