What Can BrownDog Do For You?

What Can BrownDog Do For You?

Hi. I’d like to introduce you to a friendly face. His name is Brownie. 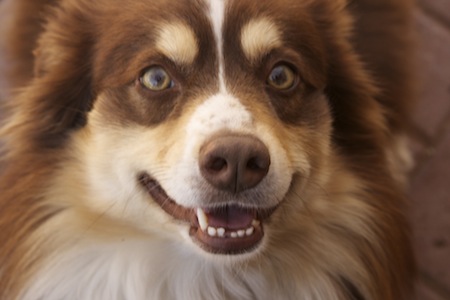 Yeah, his owner didn’t work too hard on that name. “Why, that dog is brown. I know! Let’s call him Brownie!”

What his owner (a neighbor of my best friend) lacks in creativity, he makes up for in being a pretty nice guy.

Unfortunately, that good neighbor has fallen on some hard times. His small plumbing business had success tied to the housing industry. When things were good, Brownie’s owner was doing good. When the economy laid down and didn’t get back up, the business struggled.

Sad to say, those good folks had to sell their house, horses, and fleet of nice cars.

And that leaves us back at The Brown One who is an Australian Shepard. He has papers to prove he is somebody, and a yearn for herding in his blood.

Brown Dog is bunking down with my best friend’s family these days. Brownie was largely ignored for most of his early life, so the attention of a whole family and other dogs to play with makes him super happy.

You see, Brownie is a special dog. Or, speshul. One would think that The Brown One isn’t very smart because he leaps and rolls and bubble heads his way around the world. Sometimes that dog makes me shake my head. And my fists. He can be so dense, really.

Brownie is the kind of dog that will come along with me when I take a walk, not that I have any say in the matter. He’ll escape his confines and come along no matter what I think on the subject. And further, he’s the kind of dog who will run ahead of me on the banks of the irrigation ditch, then down in the bottom, will roll in the muck, then run back and jump on me.

And when I holler at him, he wags his tail and that tongue lolls out and he looks at me and says “what?” in doggy-nacular.

There is only one human in the world who really understands The Brown One, and that is The Good Man (who I happen to believe is part dog, if you must know). The Good Man will take Brownie outside and throw the ball and play doggie games and Brownie gets WAY over excited.

For his trouble, The Good Man comes away with bruises and small bites up and down his legs. See, Brownie will get himself worked up and then try to herd everyone as is true to his breed. Brownie is a jumper so his “move it along” bites can go as high as the butt region on the well over six foot tall Good Man.

All of the rest of us, we holler at Brownie. “Damn it Brownie! Brown Dog, DOWN! Brownie, stop!!”

The only human he’ll actually listen to is The Good Man.

What Brownie really needs is a job. He’s got this strong innate drive to herd cows or sheep or something herdable. Sad day for him, Brown ain’t got no herd to herd. Right now, Brownie would be a huge liability to an actual herd of animals because he’s not well trained. But with some work and some time, Brownie could be a damn fine cattle dog. He’s got more in that brain bucket than first meets the eye.

Instead he herds a group of humans who may or may not be his permanent people and those people yell at him all the time. Brownie just wants to run. He’s a country dog and knows no borders. He’s the sort of damn dog who will run at a car.

But don’t cry for me, Argentina. Brownie has it all right. He’s landed with a family that gives him regular kibble and my two soft hearted goddaughters pull ticks and fur knots off of him and love on him and coo in his velvety ears.

And when he’s really lucky, Nina Karen brings The (Good) Tall Man to visit and someone finally understands.