Back in August, I mentioned that I work in office buildings located right next to a public park and marshy baylands that are home to quite a few birds.

Back in August, it was all about the Canada Geese. Lots and lots of geese.

I’m endlessly fascinated by all the wildlife, so I try to find the time during my work days to take a break and use the beautiful walking trails in the area. I love to stroll by the lagoons, all teeming with wildlife.

Among others species, we have flounder, bat rays, ducks, herons and egrets. The more I sashay around the lagoon, the more I’ve come to recognize many of the animals.

For example, there is this handsome fella (at least I think it’s a fella). This is, I believe, a great white heron: 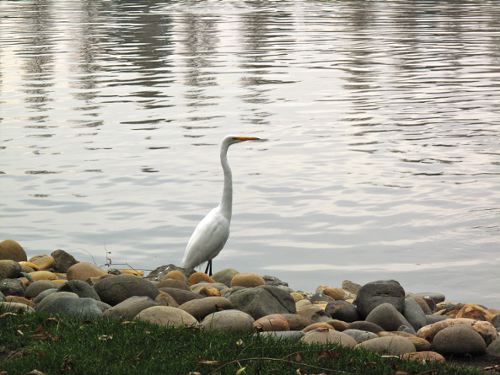 This heron is always found camped out in one corner of the lagoon. It is where the water flows into the lagoon from an underwater pipe, so the bird stands there gazing into the water and picking off small fish.

For comparison, here’s a snowy egret. They are a bit smaller than the herons. 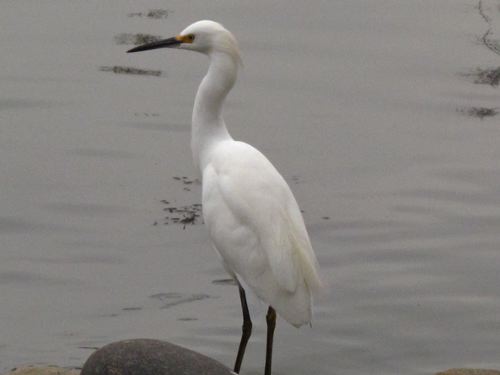 As the weather has turned cold, I’ve noticed more and more numbers and species of birds have come to call our little baylands area their home.

Mostly, these birds all live together in harmony. There is plenty of fish to eat and lots of room to roam.

But a few weeks ago, some new thugs hit town, and they’re messing up the harmony in my lagoon.

The pelicans have brought a weird vibe to the whole area.

Today, I went for a walk and took my camera along hoping for some inspiration. After a long week at work, I had little left in the tank. A photowalk seemed like a good idea.

So while taking a few snaps of my friend the heron, I noticed something odd happening.

About eight pelicans were swimming in fast, full speed ahead. I suppose you could call it ramming speed, and they were headed toward the subject of my photographs.

In other words, they were charging the heron.

Suddenly, every heron and egret in the large lagoon came flying and squawking their way over. There was dive bombing and vocalizing and tense moments.

After a few minutes, the pelicans turned and swam off.

Wild! I’d never seen anything like it! Shaking my head, I began walking again.

A while later, in the next corner of the lagoon, it happened again. 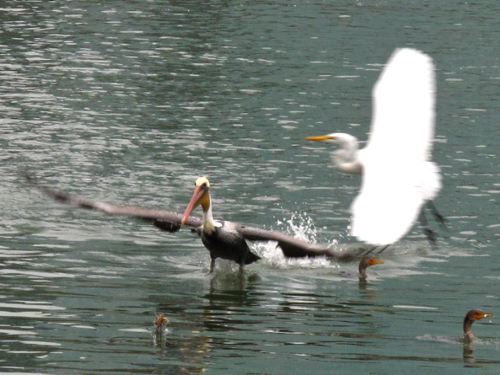 Water splashed, birds squawked. This one was a doozy. It was a well-executed, well-choreographed battle.

After a lengthy tussle, the herons and egrets prevailed again and the pelicans were chased off.

Now every heron and egret was on high alert. They were positioned strategically around the lagoon, each surveying a different direction, eyes sharp for another attack by the pelican insurgents.

Soon, in yet a new section, it all started up again. The splashing, the squawking, the fighting.

From the rear, a large battalion of little black ducks (I believe they are called American Coots) got in the game. They swam over in formation and clumped up, creating an obstacle to prevent the pelican progress. This is a few minutes after the battle was won. Here, they rest, conserving energy to prepare for the next battle.

A heron soon made his way over to address the soldiers. 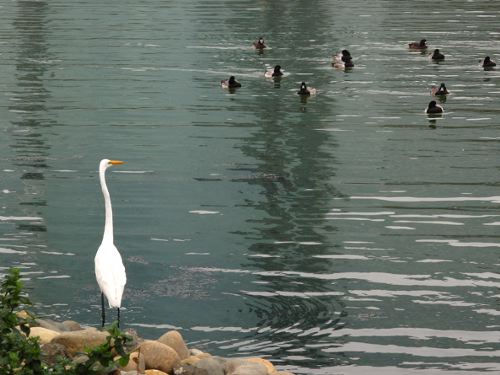 “Excellent work, troops. Today, we’ll endure this pelican insurgence. Historians shall speak of this day. Children will learn our names. Our women will weep at our graves.

Coots! Ready your snackies and eat hearty… For tonight, we dine in hell!”

Sure enough, it was only a few minutes later when this gent sailed by. 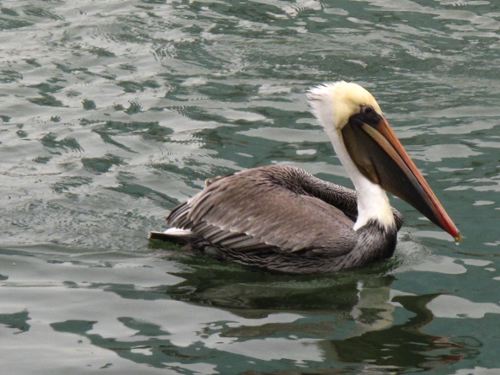 This time the herons took a different approach and lined up. They all stood guard, and as the pelicans swam by, each heron in turn would yell and flap at the pelicans until they moved on, then the next would pick up the fight. It was an amazing bit of coordinated defense.

Not sure if this photo can even capture it all, but bear in mind that while you can see about fourteen herons in this photo, there are more around the bend, waiting their turn. 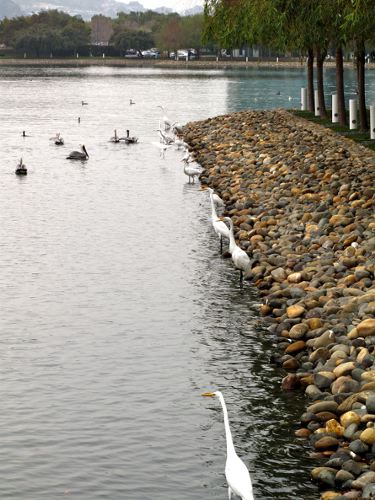 By this time, I’d made my way around the loop and it was time to head back to the office. As I left the scene, I wondered how long the battle would rage on.

And the geese don’t care. 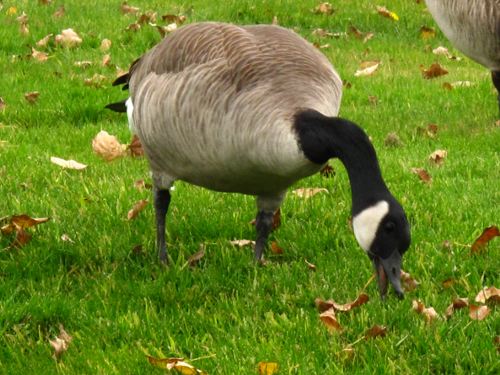 Don’t let the vicious battle happening just a few feet away get in the way of your gorging yourself there, big guy.

All photos by Karen Fayeth